JCVD Van-Marrathonne Wrap (The Wash Up of the “Washed Up”)

Even prior to the end of this at times grueling project I was struck by how even though I watched 20+ JCVD movies over about the same number of days, and that these movies were largely the same movie with a different bow tied to it, I never really found myself getting jaded or really bored, aside from the very worst few.

I think early in his career JCVD found his niche and made the choice to never stray too far from what worked, I can’t say that he ever elevated the material and made bad movies better, but a backhanded compliment might be that at least in the main he didn’t make things much worse.

I ask you: Who could possibly tire of this?

So in summary, somehow a guy with limited English in the late 80s and precious little acting ability found a way to continue over three decades, at the end of which he is looks only marginally older than 20 years ago, still can’t speak English or act, but can still throw a kick when required, only with less frequency.

As good as JCVD gets.

You could do worse

OK, without being anything noteworthy.

Cringeworthy yet oddly watchable at times.

OK, now you HAVE done worse

These basically all suck, but aren’t the bottom of the barrel yet.

Avoid at all costs

When you’re ranked 19th through 21st in a JCVD marathon you know that somehow you’ve wronged someone in a former life.

My top 10 highlights in answering the 10 JCVD things to look for.

(It is worth noting that before I watched even one film I had I think the top 8 questions drafted up, and by the third I had rounded it up to a nice neat 10.)

1 – Why is he French?
Best answer – You pick from the following:
–  French Canadian
–  French Polynesian
–  Parents were French Wine Makers (My fave)
–  Adopted by French people in Indo-China
–  Born of French settlers in Nawlins

2 – Who is he saving/helping?
Winner: Cyborg – Saving the planet Dude!
Runner Up: Second in Command – Saving a President is always important, even the Prez of Moldavia.

8 – Are there any other recognisable actors in the film?
Winner – Bloodsport – Forest Whitaker. Come on, an Oscar winner!
Honorable mentions
The Quest – Roger Moore: James Bond himself.
Double Team – Mickey Rourke / Dennis Rodman: The most nutso duo I can think of.

9 – Is there a love interest? (Or at least some tit!)
8 out of 21 films = 38%. I like those odds.
Best? Double Impact: Blonde chickie. The most memorable scene featuring a woman I had never heard of before, and have never seen since. So much potential weighing on her shoulders, (well the front of her shoulders), perhaps she couldn’t take the pressure.

10 – Is the damme thing any damme good?
Mostly watchable, but as you might expect… Not really.

Over 20+ mostly low budget B movies you see some things that you wouldn’t ordinarily witness in your normal safe “Hollywood” flicks. Sometimes a director gets lazy, other times bad acting or budget constraints force short cuts.

In any case here are 10 things that made me say hmmmmmmmmm.

10/ Bloodsport – The “I love you Man” moment that closes the film.
9/ Nowhere to Run – A prison bus flips over 3 times because it braked too hard.
8/ Hard Target – Knock out a snake, set it as a booby trap. Have success!
7A/ Knock Off – Counterfeit Jeans! Homer was right!!!
7B/ Knock Off – A shoe blow out caused by faulty fake Pumas.
6/ Double Team – Dennis Rodman singing/rapping (?) on the title track.
5/ The Quest – JCVD plays a 35 year old orphan?
4/ Kickboxer – At last, a JCVD dance sequence. Just what the world wanted.
3/ The Hard Corps – Kill a guy, feed him to the dogs, lick his blood off your fingers!
2/ Desert Heat – JCVD and Danny Trejo communicate with coyote calls.
1/ JCVD gets on the ice in Game 7 of the NHL finals! The stupidest moment in JCVD history. 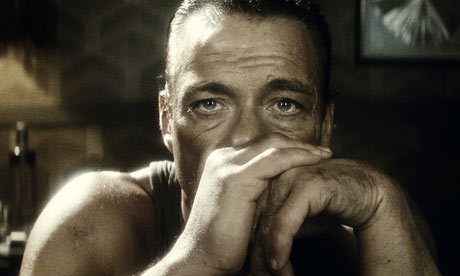 Ladies and gentleman, the JCVD Van-Marrathonne is officially over.

While I try to throw a joke or two into proceedings when I can all of the opinions presented in my reviews are genuine. I don't expect that all will agree with my thoughts at all times nor would it be any fun if you did, so don't be shy in telling me where you think I went wrong... and hopefully if you think I got it right for once. Don't be shy, half the fun is in the conversation after the movie.
View all posts by OGR →
This entry was posted in Film, JCVD, Lists, Superstars. Bookmark the permalink.