Time for a change up.

To date I have watched pretty much what I have wanted to watch, with very few exceptions, nothing good at the video shop, wifey’s choice, fucking Star Trek!

Here is the cover from the pic. 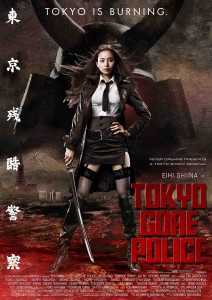 And whaddya know he was right, I had already found it myself and checked it out. This was just before this site started up so I never formally discussed the film, but if given 30 seconds in my capacity as a “guy who writes about movies”, I would explain it something like this:

“This is a crazy-ass genre flick with a threadbare plot about wounds mutating into weapons, leading to freaky shit like a severed torso growing crocodile jaws where the legs were, and worse happening to some poor guy’s newly abbreviated shlong. It had plenty of gratuitous gore, some Japanese chicks in short skirts and enough blood packs to remake Jaws in a red ocean.

Apart from it being very pointless and almost impossible to recommend to almost anyone that I know I kinda liked it, though more as a curio.”

But I didn’t have a website, so the film remained unspoken to anyone until I finally ran into someone with vaguely similarish tastes and I was able to tell him about it.

Yesterday I got another pic-text from the same guy, SuperMario himself. Amazingly (as it was over 12 months later) the new flick is made by exactly the same guy who made Tokyo Gore Police, he must have a keen eye for DVD covers. Here it is. 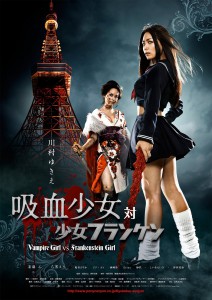 "And the award for Best Picture goes to..."

So in honour of 2 random texts from the same guy 12 months apart I thought I might broaden my horizons from time to time and if anyone sends me a recommendation or request I will see if I can find the thing and put my spin on things.

1/ I won’t go to a cinema and pay actual cash to see stuff that I know is utter crap in advance, so no “Twilight 3: Pretty Boy’s Cuddly Revenge”, (at least until it hits DVD, I’ll probably buy it!)

2/ I’ve had my “Woaahhh, that’s edgy!” phase, and I’ve seen the Cannibal Ferox/Holocaust films, so I can’t be bothered revisiting deliberately black pictures. (Last House on the Left, Salo, even AntiChrist).

Where no 2/ is concerned, I have a job and a kid, and a tiny… conscience. More importantly I have a total lack of interest in something made purely to shock and gross out. A recommendation needs to have a crack at either telling a story or trying to entertain, even a little bit.

In honour of SuperMario’s initial suggestion in the next week or so I’ll get to what will surely be a prestigious, multi-award winning masterpiece in Vampire Girl Vs Frankenstein Girl…

That is if SuperMario hasn’t rented it first.