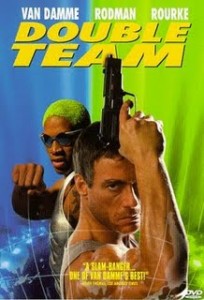 A poster as awful and uninspired as the film it was promoting.

JCVD has retired from the CIA to be with his pregnant wife, which I guess is noble. Only he goes back to the CIA on a one off mission to catch his nemesis Stavros, played by Mickey Rourke in full on coked-up apathy. Of course this means JCVD leaves his preggers wife to go back, so that is probably less than noble.

This is a vehicle to get Dennis Rodman into a film so let’s not worry too much about the plot. Suffice to say that Rodman is a weapons guy who helps JCVD hunt down Stavros, who hates everyone as a failed hit left his son dead.

Ya still with me?

At one point JCVD is presumed dead but he is really held captive on an island, meanwhile Stavros takes his pregnant wife to steal the kid to raise as his own, or something.

After a great many training montages JCVD escapes, teams up with Rodman and in a bad-acting showdown of mythical proportions they battle through Rome trying to kill each other, with a tiger (!) thrown in for good measure.

And there is a shameless Coke product placement in the final sequence that must be seen to be believed!

Mickey Rourke is steroid-buffed to bejesus here, and I’m pretty sure after he sobered up (if he has yet) around tax time he turned to someone and asked “I was in a movie called Double Team?”

Rodman is probably much the same, although admittedly he hasn’t yet found a reason to run from attention, I at least hope he was a little embarrassed at having to drop almost 10 shockingly bad basketball puns and jokes into the other lame dialogue.

JCVD probably sighed and shrugged, knowing his career had around another 20 of these films still yet to come.

An obscure reference is made but clears nothing up.

His wife and unborn kid. The CIA.

Mickey Rourke in full on ‘roided up mode. A tiger.

A Euro-techno song featuring Dennis Rodman. That lousy and cheesy enough for ya?

Verdict – This was nothing more than a poorly conceived cash-in, hoping to get viewers through name recognition. Awful.

While I try to throw a joke or two into proceedings when I can all of the opinions presented in my reviews are genuine. I don't expect that all will agree with my thoughts at all times nor would it be any fun if you did, so don't be shy in telling me where you think I went wrong... and hopefully if you think I got it right for once. Don't be shy, half the fun is in the conversation after the movie.
View all posts by OGR →
This entry was posted in Crappy Movies, Film, JCVD, Movie Reviews, Superstars, The 7th Level of Suck. Bookmark the permalink.