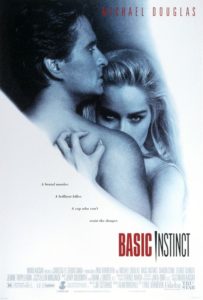 A curvy naked blonde sits atop a horizontal man. She thrashes, first sexually, then with great violence. The once beneficiary turns victim.

The tone is set.

Nick Curran (Michael Douglas) is the cop with the temper and a checkered past.
Catherine Tramell (Sharon Stone) is the ‘did she or didn’t she?’ suspect. A sexy thriller writer who writes sexy thrillers about sexy events in her sexy life and the sexy lives of others. Sexy…

There’s a male ex-lover. There’s a female lover. For both. There are dark pasts that come up in untimely moments. Rumours that add intrigue and new clues that accuse as much as the confuse.

All the while Catherine looks at Nick from beneath her blonde hair and brunette eyebrows, daring her to arrest or bed her, before about facing and leaving, designer clothes fluttering in the non existent breeze.

The fun in Basic Instinct isn’t the intrigue or the plot twists which are frequent and often ridiculous. It isn’t in the subtlety at all, because there isn’t any. It is in the most boorish and unsubtle moments, the frequent nudity, the lurid violence, the unintentionally hilarious moments involving Nick’s partner Gus and Catherine’s lover Roxy.

Try as I might, I couldn’t stop admiring the limited efficiency of this film.

Undeniably a confluence of events. Basic Instinct was released in a year I turned 18, when I was young, dumb and full of… salt and vinegar chips. It was the rebirth of commercial R rated films, sexy, violent and to an 18 year old, compelling for reasons even beyond that.

The quarter century that has elapsed since has not been kind to my view of the film. I can now see the ridiculous contrivances, can hear the inane dialogue, can chuckle at the over-the-toppery. But I cannot deny that the film still hits a lot of buttons and works as a mindless piece of adult(ish) drama.