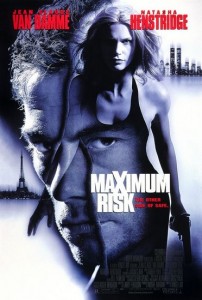 “Scuse me buddy, you’ve got a tit in your eye!”

Hey-Ho. No-one was more surprised than me when it came time to watch Maximum Risk.

This film is actually pretty good as far as mindless action pics go, and especially when compared with most other JCVD films that I have watched during this at times painful journey. It also looks like it had a budget, and that someone wrote a basic script rather than simply pointing the camera and telling JCVD to do a roundhouse kick every now and then.

JCVD is his own twin (that he didn’t know existed), who dies at the start of the film. Apparently the deceased was trying to reach JCVD before he was rudely interrupted by his own premature death, so of course Johnny goes to the US to find out why.

In America he comes across the ex of his brother (who he bangs), the Russian Mob (who want him dead), and corrupt cops (who want info that he doesn’t even know he has.

The action sequences are quite good, the pace of the film is well structured so that plot and dialogue are positioned well between enough violence and car chases to keep you interested. They also switch up between karate, punch ups and gunfire, there’s also a nice sweaty steam bath fight.

We even have Natasha Henstridge in her still just post-Species prime, who is savvy enough to know when to look concerned, and when to take her shirt off for almost no reason.

The finale of the film takes them back to Europe, where all the active parties in the film have a climactic showdown which involves much exploding and grimacing.

Hollywood simply don’t make straightforwd point A to point B action flicks like this anymore, which is a shame, because sometimes there is nothing better than sliding a DVD into the tray and shutting the brain down for 90 minutes.

6 – Does he hold poses after the final punch/kick? (Extra points for slo-mo!)

Verdict – This is the only JCVD that I have watched so far that I even considered giving a “that’ll do” 7 score. In the end it just barely misses the mark but it is most definately worth a look, even if you aren’t a big JCVD fan.