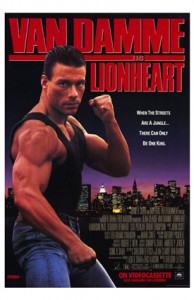 Hang on, they mis-spelled “Wrong Bet”!

This was Wrong Bet when I watched it, and given that half way through the final fight it is the phrase JCVD spits out to his buddy it is what I know it as.  (The reason it was also called Lionheart is that JCVD’s character was called Leon, and they started calling him both Lion and Lionheart.)

If I remember rightly this was the first movie in which JCVD appeared alone on the cover, and it does seem a bit like a quickie cash in to see if he could carry a film.

JCVD is in the French Foreign Legion (again), when his US based brother is attacked and nearly killed. JCVD flees the Legion and heads to the US to be with his brother, only he ends up in New York City when he needs to be in Los Angeles, broke and with no way of getting cash, except to…

FIGHT! JCVD enters a Kimbo Slice style underground fighting ring and makes a few bucks, one of the guys recognises that this ain’t no ordinary fighter and convinces JCVD to enter a more serious arrangement run by some white blonde chickie who nearly (but never does) drags out the white pointers several times in the film.

FIGHT! He wins this fight with one punch and takes his cash and runs to LA, with the original buddy in tow. Vowing to never again fight.

When they arrive in LA JCVD finds he is too late to help his bro, and the widow isn’t too happy to see him either, declining his offers of help and cash. The Legion also has anticipated his move to the US and are on the lookout for him.

FIGHT! A crappy montage of a few fights show that he moves up the ranks, fortunately the blonde chickie has underground fighting operations on both coasts so she heads over with the yams to tease the audience some more without ever paying off. She sees a chance to make some serious bucks by pitting the “he’s so hot right now” JCVD against an Andre the Giant-with muttonchops guy, hoping to bet against JCVD while leading other “investors” to believe that the big fella has no shot, when in reality he is a seven foot behemoth who has massacred all previous opposition, while all JCVD has done is won four fights against a few amateurs.

Even though he has misgivings little Johnny decides that he must…

FIGHT! Against my better judgement I almost forgave the film for its many flaws simply for the final showdown, which is actually OK as far as slugging matches go.

His Bro (ideally), his widow and her kid.

6 – Does he hold poses after the final punch/kick? (Extra points for slo-mo!)

Three faces i recognised, all goons.

Verdict – Cliched, formulaic but ultimately there are worse ways to blow 90 minutes. The finale even has a slow hand clap bit!