Indiana Jones and the Raiders of the Lost Ark (Review) 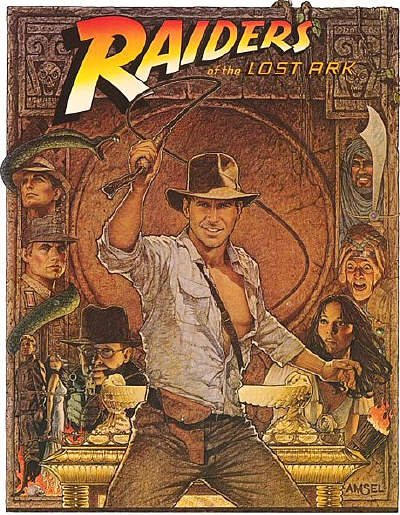 The original and the best.

Every year there are films that try to replicate the success of the Indiana Jones formula of fun and frenetic action and over the top escapades, the most recent failed example being Indiana Jones and the Kingdom of the Crystal Skull.

It is fair to say that almost without exception they fail, though there is a legitimate argument at least for the first Pirates of the Carribean movie.

Why I am not sure. It seems a reasonably straightforward equation. Create a likeable everyman hero, put him in perilous situations that require quick thinking and often quick getaways, give him a good foe to prevail over, sprinkle liberally with bugs and snakes and serve for 2 hours on a big white screen.

It must be said that Harrison Ford as Indy is one key ingredient, he isn’t overly buff, can’t do a karate kick to save himself and isn’t too pretty that the guys in the audience would feel intimidated. He actually isn’t “too much” of anything really, so he never really alienates any portion of the audience.

It was also a wise choice to make the bad guys Nazis, as even the Germans don’t mind rooting against them.

The opening sequence of Raiders neatly encapsulates the appeal of the entire franchise. There is a little humour, tremendous inventive action sequences, booby traps, treachery, treasure and of course creepy crawlies.

We also get to follow the expedition for a good three minutes and try to gather exactly what is happening before we even see Indy himself.

It is pre WW2, and Indiana Jones is hunting, as always (although we don’t know that yet) for lost artifacts and relics that he wants to donate to museums and keep out of the clutches of evil-doers who only want the items to finance nefarious doings.

This initial sequence has him tip-toeing through the various traps and pitfalls in order to claim a golden figurine from the centre of a room. It seems that if you have an extremely valuable golden figurine and feel that you must go to the trouble of rigging booby traps and indeed a massive self destruct trigger you might be better served spending the same amount of time hiding the figure instead. Saves you time, money and having to rebuild the whole cave system in the event of a failed treasure hunt.

Imagine how pissed the natives would be if the figure was simply knocked over by a rat or a bird?

Whether Indy gets the item he seeks or not is seldom important, it is the ride that matters, in this case though he fails.

Back on US soil we meet the Monday – Friday Indiana Jones, a very popular college professor of archaeology who is admired by his students, and consulted for his expertise by various parties.

In this case it is the army that comes calling, asking for advice regarding an intercepted German communiqué. Apparently Hitler himself has commissioned a hunt for the “Ark of the Covenant”, and has found the area where it is thought to be located.

Of course, Indy agrees to check things out for himself, and with his close friend Marcus, played by Denholm Elliott along for the rise he almost immediately sets off.

Here we meet another oft-copied Indy signature, the overlay of a map showing exactly where on the globe Indiana is headed, this helps give a better impression of the vastness of some of his travels and the extent that he goes to to achieve his aims. Initially he heads to Nepal, as a vital piece of equipment that will aid him in his hunt is conveniently located there, even more convenient is the fact that it is held by an ex-girlfriend of his in a seedy bar that she runs herself, her name is Marion and she is played by Karen Allen.

Marion herself is another strength of the movie, she is spirited and spunky without ever being sexy, and is often in need of help without ever simply being helpless herself.

After an uncomfortable hello and the obligatory action sequence Marion decides to tag along, and when I say decides she doesn’t have too much alternative as her bar has been razed to the ground. If there is a lesson to be learnt from this it is that hanging around Indiana Jones does tend to put you and the things you own in peril.

Once the action moves to Cairo the pace of the action steps up another notch as Indiana comes into closer proximity to the naughty Nazis, who being the bad guys will stop at no lengths to get what they want. They have been making slow progress in their search but the arrival of Indiana inadvertently helps them along.

It is at this point that we have now met all the key characters in the film, and the final hour or so is simply masterful. In set piece after set piece the audience can hardly pause for breath, each new drama finds Indiana in more and more peril, and brings him closer to his goal but equally finds him also closer to losing everything.

The pacing of this film is just great, the action barely relents and important plot events aren’t simply introduced in between in expositional conversation, but they unfold as part of the action in a logical manner. You can watch the film with your brain shut off and simply go wow at all the pretty colours and explosions, but Raiders is a little deeper than just mindless action and rewards are had for paying attention.

The film is a little scary and violent enough in a PG 13 way that action fans won’t be yawning, each death causes consequences that either bring more characters into play, or trigger other events that must be dealt with.

Being that it is an 80s film there are some terrific stunts that happen throughout the film, Indy’s trademark hat is especially handy in this case as it camouflages the stuntman’s face from the screen in the more dangerous bits.

Running your eyes down the page should show just why this is almost the perfect action film: stunts, humour, action, danger, Nazis, a hat! What more could you ask for? Two sequels is my only answer.

Unfortunately we got three.

Never mind, the Indiana Jones box set containing the first three films made by a pre-wheelchair Harrison Ford sit quite cosily in my collection. Too many directors now aim to make “epic” films, Spielberg himself has done it for years, though admittedly he is better at it than anyone else, in the 80s it was enough to have a movie with a beginning, middle and end, and not bother with red herrings, unnecessary twists or gratuitous violence.

I will continue to drag out the (first 3) Indy films and remind myself that sometimes just making a fun movie is enough.