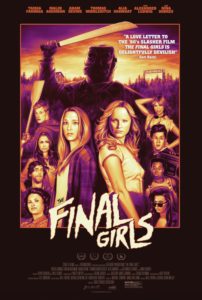 They are a cult. Every so often they gather to revisit the glorious grainy footage of the inadvertently hilarious and altogether cheesy slasher film Camp Bloodbath.

So I guess they’re not a cult in the evil way, more a nerdy one. The one you’d not want your kid to join, but wouldn’t feel the need for an intervention if they did.

It is at one such screening that Max – the daughter of the original film’s blonde ‘scream queen’ Nancy (Malin Ackerman) – reluctantly agrees to attend, before a frankly crazy development lands Max and a few of her friends behind the screen and ‘in the movie’.

At least the newcomers know every line and occurrence prior to it taking place, although the fact that this knowledge cannot permit them to alter events proves disconcerting.
Nonetheless they must do whatever they can to extricate themselves from predictable low budget 80s horror movie outcomes, all while Max strives to convince her ‘mother’ that she is not a movie character

The Final Girls is better than it needed to be, thanks mainly to a cast of comedians that find the funny in what could have been a mildly clever gimmick. Malin Ackerman, Adam Devine, Thomas Middleditch and others squeeze the humour whether they are ‘in on the joke’ or just ‘in the joke’, with Devine’s incessant talk about sex deliciously stupid.

The Final Girls suffers by not being ‘one-note’. Somehow by being even a tiny bit multi-faceted and reasonably innovative, it lost its audience. In a world where comedic dross like Pixels and a lazy horrendous remake like Poltergeist made over 350 million in 2015, it’s a small crime that this film didn’t make a dent in the box office.

Put another way, if Adam Sandler and his Grown Ups crew made this, it would gross half a billion and be hailed as a return to form.

Final Rating – 7.3 / 10. Comedy horror with the emphasis on comedy. Slightly too smart for mainstream teens and not nearly stupid enough to be deemed a spoof. Watch this and wonder why no one else did…