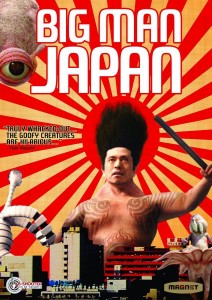 In case of emergency, break out the Big Blue Undies.

As Katt Williams would say, (he’d usually use the N-word as the full stop to every sentence but I can’t bring myself to write it here.)

If I hadn’t seen some other truly freaky shit over the years I might have been even more blown away, but there is no denying the fact that This Shit Right Here is some crazy stuff.

Amazingly enough though, is that after 90 minutes of having your jaw on the floor the most loopy stuff of all is the last 10 minutes.

Another doco style offering, Big Man Japan is a reality show participant in Japan, the latest in a long line of “Big Men” who are ordinary people who happen to be on call in case of Monster attack.

Until things get weird this seems a low key affair, BMJ is questioned and answers softly and humbly, and the background scenery is hardly cinematic, in fact most action takes place in run down areas and BMJ himself lives in a dilapidated and untended shack.

Some early metaphors (umbrellas, noodles etc) are somewhat clumsily shoehorned into the story and give an indication of what might be coming, but it is only 23 minutes in (I checked) that we can grasp the magnitude of this film.

BMJ gets the call, makes his apologies and zips off to a local powerplant where he is given a zap that causes him to grow to about 50 feet tall, he only wears the aforementioned big undies which are cleverly integrated into the story, and has advertising logos tattooed over key parts of his body. BMJ is only called upon when a monster of some description attacks, and in this case I’ll let me wife have credit for the description, take it Honey:

“He looks like a Michelin Man on the Atkins diet with a combover from Donald Trump’s barber.”

So that’s that then.

BMJ himself looks like a giant muscly baby, and he has no superpowers or special powers aside from being very “big”.

BMJ fights are always televised, though of late the ratings have dwindled, and a backlash caused by the destruction is building, BMJ’s agent sees this and explains to him that he needs to try harder, as sponsors are dropping off (literally) and she tries to sell space on more intimate and prominent areas of his person.

Intertwined between giant monster fights are the everyday events that go on for BMJ, his father has died due to massive electric shocks, he still visits BMJ #4, his grandfather in the nursing home, and most importantly he tries to visit his young daughter and his estranged wife as often as he can, only they have grown tired of his notoriety and attempt to limit his access.

BMJ worries in particular about the impact surging electricity will have on him in the long term, as he can see the evidence through his Grandpa and late father. At one point his Grandpa actually escapes the rest home and juices up, only to create a major publicity disaster for team BMJ and his agent with his antics.

The monsters are particularly inventive, even though they are hardly integral to the story (you’ll see), aside from the Michelin Man we have another that is basically a head on top of a foot, and one that can best be described as a giant ball bag with legs and arms, and one giant eye on the end of its penis, that it throws at BMJ and uses as a mace like thing.

At the conclusion of this fight another monster shows up, a big red devil with one broken horn, he fights in decidedly non-Godzilla fashion, in that he fights like a normal person, kicking and punching until the other guy runs away, which is exactly what happens.

BMJ suffers the indignity of finding that this fight drew his biggest ratings in years, and that there are calls far an encore which he would like to avoid.

I won’t go any further, but to this point BMJ paralleled the career of a pro-wrestler. BMJ was on top for too long, so the public lost interest, enter a young challenger and they actively root against him, it also seemed to be carefully stage managed by unknown parties (who probably can be easily guessed).

Sounds pretty way-out I guess too? The final 10 minutes though turn everything previous on its ear. I won’t even try to explain it but suffice to say it seemed to have absolutely nothing to do with the first 90 minutes, to the point where I went back on the DVD scene by scene to see if it hadn’t mistakenly fast forwarded through vital plot events, (it hadn’t).

Rather than argue if it meant anything symbolically I’ll just say that it was wayyy more than simply strange, but just plain dumb to go out the way this film did. I can’t say that it was going to be highly recommended anyway, but it left me dumbstruck that they decided to end the film with what occurred.

Final Rating – 6.5 / 10. An interesting, and at times amusing curio turns into a baffling head scratcher with one crazy sequence.