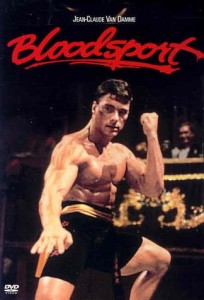 There is a full contact fighting tournament in Hong Kong. It is supposedly hush-hush but everyone seems to know about it.

JCVD skips the army to be there.

There are way too many pointless flashbacks, although it was funny to hear the kid playing a young JCVD have to force out an equally atrocious accent.

A big fella played by Ogre from Revenge of the Nerds and JCVD become buddies, so he occasionally has a reason for dialogue I guess.

There must be 40 speaking roles in this film, made for an American audience, and I swear only 4 had English as a first language, two army guys, Ogre and someone I forgot.

Bolo Yeung is the bad guy and appeared in a few JCVD films, he is a good bad guy, crazy eyes, muscles on muscles, can’t help but overact and the master of terrible voiceover dubbing.

After Bolo calmly messes up Ogre JCVD takes him down in the final with 4 spinning kicks, then for some reason JCVD and Ogre confess their love for one another!

His parents moved from France to the US to make wine. (I am not making that up.)

The memory of some kid.

Bolo Yueng, looking so buff that he might have swum for the women’s Olympic team, and other fighters from many lands.

Is the Pope Catholic?

As cheesy as 80s hair rock gets.

Yeah. It actually holds up well aside from the music, if you can ignore the cheese.

Verdict – Hard to sum up a plotless movie but this is still actually entertaining.

While I try to throw a joke or two into proceedings when I can all of the opinions presented in my reviews are genuine. I don't expect that all will agree with my thoughts at all times nor would it be any fun if you did, so don't be shy in telling me where you think I went wrong... and hopefully if you think I got it right for once. Don't be shy, half the fun is in the conversation after the movie.
View all posts by OGR →
This entry was posted in Film, JCVD, Movie Reviews, Superstars, The Grey Area, Worthwhile Movies. Bookmark the permalink.