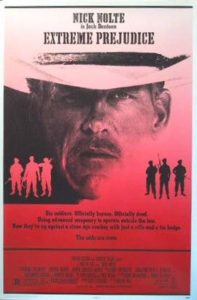 Two young boys grew up in a US/Mexico border town. One embraced law and order and became the town’s tough-but-fair sheriff Jack (Nick Nolte). The other was Cash (Powers Boothe), who chased fast money and power and became a drug dealer.

Both chased pretty Sorita (Maria Conchita Alonso), though it was Jack who ended up with her on his arm.

Trouble is a brewin’ when Cash returns to town. It isn’t long before he and Jack come face to face, both imploring the other to see things their way, with Cash taunting Jack constantly by deriding Sorita.

Well a bit as it happens. The black hats are black and the white hats white, but there are a bunch of randomly coloured hat guys who pop up here and there in the film who make no sense, other than to confuse and dilute what should be a simple head to head battle.

Each time Jack and Cash threaten to end the fussin’ and get to fightin’ the multi-coloured hats derail all momentum. Sure there is a big manic shoot out in the end where many get de-hatted (which finds the only good use for the random hats) but the damage is already done.

Walter Hill would later find the benefit of addition through subtraction in the underrated Last Man Standing, where Bruce Willis found himself in the middle of two warring factions and sagely decided to shoot them all, but Extreme Prejudice is too muddled. It is sweaty and grimy and ultimately not very good.

Final Rating – 5.5 / 10. It should have been a crime to misuse Nolte’s guttural gravelly groaning and moaning.