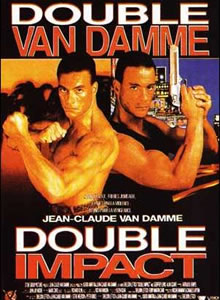 At last, the dubious title of Winner of the JCVD van-marrathonne is here!

If you ever were wondering what is the best of Van Damme’s garbage, think of Double Impact, although I must admit Maximum Risk ran a very close second.

JCVD’s parents are killed in the opening minutes, only JCVD is twins (are twins?)

One kid stays in Hong Kong to be raised by nuns, the other goes to the US with the Father’s former head of security. Both grow up with thick French accents. Strange non?

Now 30ish: The Hong Kong JCVD is a smalltime hood with a smokin’ missus, the other a prissy Karate expert living in the US. The ex security guy Frank does some homework and decides it is time to introduce them to each other and tell them about what their father achieved so that they might claim it as their birthrite. (By the way, their father built a tunnel which apparently had monetary value, it isn’t important other than giving them a reason to want vengeance.)

So they go to HK, indulge in some split screen acting and some ordinary jokes, though better than the usual JCVD jokes, and there is some “Oh I thought you were the other guy!” stuff too.

Ultimately they make their intentions clear and have to go into hiding at an abandoned hotel on a nearby island, from where they intend to launch their 3 man assault on two well armed and trained groups of drug dealers and thugs.

There is lotsa action, lotsa chasing, and they are able to fire 137 shots or so without bothering to reload. Chad, the HK JCVD, shoots and bludgeons his victims, while Alex, the US JCVD kicks ‘em around.

So we have gunfire, karate, good old fashioned throwdowns, and a wide variety of unique henchman, who in a video game would be called “level bosses” all of whom must be dealt with before the boys can take on their big bosses, the guys responsible for killing their parents.

You’ll see below why this (and even Maximum Risk) are the best of the JCVD bunch, they both tick the most boxes, and have the most dangerous and numerous bad guys groups. In Double Impact JCVD knew what his audience wanted, and went out and gave them exactly that.

It also helps that the smokin’ chick gets her kit off for a shared three way “imagination-sex-sequence” between her and the two brothers, a virtual manage au trios as it were!

Verdict – I hadn’t seen this in at least 10+ years, and I still enjoyed it the other night. THIS is the ultimate JCVD movie, and what he might choose for his time capsule.

One grows up in the US, the other Hong King. Both speak with a strong French accent.

Only a couple. No “name” actors.