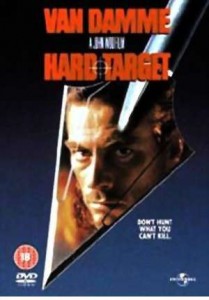 Revenge of the mullet.

I remember this coming out as it was John Woo’s US filmmaking debut, and there were high hopes. He made The Killer and Hard Boiled with the not-very-athletic Chow Yun Fat, imagine what he might do with JCVD!

One point of note, doesn’t matter what movie you are watching, if JCVD is in it he always looks like JCVD, maybe a couple years older in some more recent films, but the same nonetheless. Here though they pimped his ride and gave him a greasy mullet and an earring, what a makeover!

Set in Nawlins in the US deep South, JCVD is a random guy minding his own business. Some bad guys lead by Bishop from Aliens run a safari style outfit where the prey is… dun-du-du-dun-du-daaaaaa!!! People.

So a gravel voiced Angelina Jolie lookalike with big eyebrows swans into town looking for her homeless dad who is “missing”. JCVD bails her out of a sticky situation so she hires him as her guide for the next couple days while she looks around.

They uncover the plot, Bishop gets pissy and hires some assassins and “big game hunters” to finish them off, and there are never any cops around when the gunfights are going on in the middle of the street.

A few highlights in the closing 20 minutes:

1 (a) JCVD knocks out a snake and sets it as a booby trap for the pursuers!

(c) And Bishop logically assumes that the random snake attack was a pre-set trap!

2 There is a massive shootout in an abandoned, yet seemingly operational factory.

3 There is even the old “arrow stopped by a flask in the pocket” gag.

This movie has all the wacky Woo stunts that abound in his films and a huge bullet count with some impressive explosions. John Woo seems to give ordinary things mythical qualities through slo-mo, music and allowing the camera to linger a few seconds beyond normal.

He is from Louisiana in the French district. (Which at least does exist)

Over 30 mercenaries lead by a cartoon Lance Henricksen.

No! This was about the 15th movie into the marathon and the FIRST TIME JCVD kept his kit on. Woo must have something against it.

Yep. Bishop. A bad guy from Commando and a Raimi cameo.

Verdict – It doesn’t matter how preposterous the plot is Woo makes things look fun and keeps you entertained.