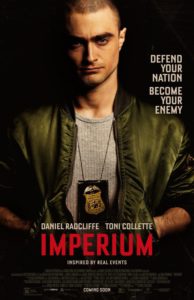 Here is a film that is not as powerful as the emotions it elicits – though it is actually quite well made and effective in its own way – and unfortunately a film becoming more relevant by the day.

Nate Foster (Daniel Radcliffe) is an eager though wet behind the ears FBI agent who ‘wants to make a difference’. The problem is that while Nate exhibits strong powers of deduction and reasoning, his diminutive stature and baby face suggest that field work isn’t in his future.

With rumours that white supremacist organisations are planning a terrorist attack in the inland United States, Nate is tabbed to go undercover within their ranks to sort out the genuinely dangerous from the merely deplorable and deranged.

Once behind the skinhead curtain, Nate’s suitability no longer matters, if he is found out the consequences for him become swiftly dire, what with an already dangerous and volatile group motivated by hate and a deadly secret.

Nate ingratiates himself across a few fronts, the dim witted and easily influenced who just want to stomp *insert epithet here* – of which there are many – the more dedicated and serious, and the even more dangerous and more subtle groups with less obvious intent but potentially larger plans.

Moving higher up the ranks, deeper into the troubled skinhead world, and simultaneously further away from FBI assistance, Nate reaches a point of no return, even as it looks like he might be on a wild goose chase.

Imperium is (I think) an uncomfortably easy film to make, given the extremely (pardon the pun) black and white subject matter. A quick glance at the synopsis will quickly decide your allegiance, and if – like hopefully 99.99999% of the globe – you find the skinhead mindset disgusting, you will immediately side with Nate. Plus, he’s Harry fucking Potter for Christ’s sake.

While Radcliffe is indeed the closest thing to star power the film has, ultimately he may have been slightly miscast as Nate. For mine the film could have used someone slightly older and perhaps less likeable, but even with the ever expanding Radcliffe, it works as a film that will stir the emotions and ideally, give more credence to the fact that these inflammatory issues must be addressed by society even more forcefully.