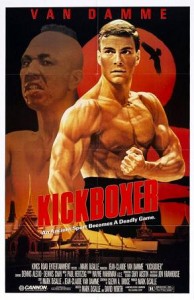 Now, where is my agent?

Guy gets dissed. Guy can’t possibly win. Guy trains hard. Guy overcomes odds and wins. All to a horrible soundtrack of supposedly motivational music probably with titles like “Fight to survive”, “Take it to the limit” and “No pain, no gain”.

And Kickboxer is indeed a movie about shirtless idiots kicking each other. In fact, it does tick a lot of the boxes on the list of Van Damme-isms that I put together before embarking on this pointless quest.

JCVD is actually the brother of the US born World Champion of kickboxing, who decides to go to Thailand to test his skills against those that apparently invested the style. JCVD is more the sparring partner early on.

Of course in Thailand the brother goes up against the national treasure in muay tai who kicks the living crap out of him, leaving him a terrible acting mullet-having paraplegic. JCVD inevitably swears he will get revenge, and with the help from the standard JCVD “Black Guy” and a (Chinese) Thai master, he manages to become a kickboxing master in the space of only a few montages, picking up a Thai girl in the process.

The acting in this is bad even by normal JCVD standards, the brother reaches for new lows in realism and the love interest is obviously not yet comfortable with English dialogue. This is the exact same film made multiple times over the years by a number of aspiring actor/martial artists, three by JCVD himself if you include The Quest and Bloodsport alongside this (and that ignores the Kickboxer sequels)!

The final fight is awful, the bad guy doesn’t get a scratch for the first 90% of the fight, then inexplicably JVCD has a second wind and he lands every punch and kick without himself being touched in shoddily choreographed manner. In marginal defense of the premise though, the bad guy Tong Po is actually a pretty good bad guy, he is bigger and obviously a daunting prospect to face, which is probably why he did in fact appear in the sequel.

His brother is American but somehow he was born in Belgium and speaks with a French accent.

Lot and lots of times.

Only the trainer, who I probably recognise from other JCVD movies.

Not even in a tragically humorous way. A derivative Karate Kid rip.

Verdict – This is what Kill Bill and a myriad other films parody when they poke fun at martial arts films.