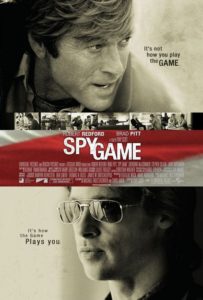 Spy Game is one of those films that leave you wondering if the FBI and CIA are a bunch of guys having all manner of fun dealing with life and death situations each day, instead of a bunch of suit wearing guys analysing data and looking in vain for leads.

The ‘fun’ starts here with the high profile arrest of agent Tom Bishop (Brad Pitt), leaving him imprisoned and sentenced to execution in a Chinese jail.

With the CIA apparently having no knowledge of the operation, and the USA standing to be red faced at the prospect of rogue spies operating unbeknownst to them in a country where relations are already sketchy, an uncomfortable decision looms.

Nathan Muir should be prepping for his retirement, but with a few days left the timing is such that he is called in to assist in the Bishop conundrum.

There are but 24 hours remaining until Bishop’s execution at the hands of the Chinese, plenty of time for lots of jump cuts and stylish tics in true Tony Scott style, but enough time to save a man.

In a series of increasingly implausible flashbacks we learn that not only do Bishop and Muir share a past, but that it is highly unlikely that Bishop would ever sell out his country.

The two leads really only share screen time in flashbacks. As a result it isn’t a matter of whether Redford and Pitt have chemistry, but can the film co-exist with itself.

Spy Game is one of those ‘half & half’ films, half is a political drama with intrigue and tough decisions, the other a somewhat rushed thriller. The two halves don’t correlate well and as a result the film only half works. At two plus hours in length, Spy Game could easily have lost thirty minutes or so with no impact on the end result.

It also doesn’t help that it key plot points call for one party to be incredibly savvy and resourceful, and the other to be a pack of bumbling idiots that overlook obvious clues and don’t fact check anything.

Ultimately for those who are willing to be swept away by the dreamy eyes of former Sexiest men alive (albeit from different eras), or distracted sufficiently by Tony Scott’s visual flair and ability to make more from his ingredients, Spy Game might suffice as an alternative to, y’know, doing stuff.

Final Rating – 6.5 / 10. Light fluff masquerading as life and death (for the easily pleased). At least Tony Scott was capable of giving colour to the ‘grey area’.