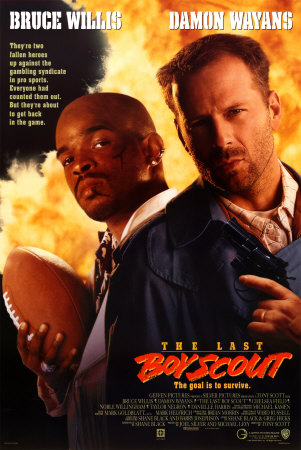 I’d look more worried if the explosion was behind me.

Watching The Other Guys recently reminded me more than anything of the lack of decent buddy-cop films made in the last 10 years. For a genre reviled for it’s laziness and predictability you would think that every couple years someone would nail one and create a minor classic but alas it hasn’t happened for so long.

The fact is that The Last Boy Scout was slaughtered critically when it came out for being far fetched and in essence terrible – but I fail to see anything that has come out in the last few years that is noticeably superior.

See for yourself, search Wikipedia for “Buddy-Cop Movie” and here are the results. I took out most pre-00s films and anything I had never even heard of:

Cop Out – Don’t get me started again.

Cradle 2 the Grave – Jet Li in his “I’ll settle for anything” phase.

Hot Fuzz – Great film. More a satire on the genre.

I-Spy – Better than most in the 00s, which is more an indictment on the “most”.

Men in Black – Adored at the time but let’s face it it’s a kiddie film.

Metro – More Eddie Murphy trying to get back to Beverly Hills Cop.

Righteous Kill – I couldn’t work out if it was a comedy. I laughed a bit in between the tears of pain.

The Rundown – Again the fact that it seemed better than most highlights what an awful decade it was.

Rush Hour 1/2/3 – The first was actually pretty good, it went increasingly downhill from there as they squeezed every $ from the formula.

Showtime – Another cop / actor film. Even worse than the “lousy” The Hard Way.

Now look even though I bag a lot of films on this site I am pretty easily pleased if a film ticks at least a couple of basic entertainment boxes. I am willing to rewatch a film even if I know it isn’t much chop as long as I can be confident of either a couple of laughs or a couple of good action scenes, (in a pinch throw in some nudity to cover over some of the inadequacies).

To back that up I think I have seen almost every film above more than once bar maybe 4 or 5 (there are 24 films up there!). Looking at the list now there are only 4 films that I would rate as “worthwhile”, Hot Fuzz, Rush Hour, 16 Blocks and Kiss Kiss, Bang Bang.

Hot Fuzz is just great. Made in the UK to pull piss out of the action genre it is nonetheless better than anything else on this list – even when only the action scenes are considered.

Rush Hour had the right mix of action and comedy and was very likeable, the second two films less so.

16 Blocks was more an action-drama than an all-guns-blazing comedy extravaganza. It was pretty good but no more than that.

The Last Boy Scout is not without it’s flaws, not every joke works and it suffers a little bit from trying to cram too much into the film so that occasionally it loses its way for a short while. But it is still a great movie.

So give me 5 reasons that explain Why The Last Boy Scout actually more than just good? Why is it great?

Every good action film needs good bad-guys. This film has many, spanning the various echelons of no-good-dom – from minor but still nasty and memorable henchmen (nose punched through brain anyone?) all the way to the Rich White Guys. All of them deserve a flogging and all of them get it. 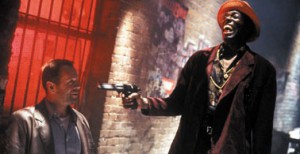 A Bad Guy and a Quotable – That’s Two Birds!

Try these for size:

–         “You tripped, slipped on the floor and accidentally stuck your dick in my wife.”

It is an action-comedy after all. There are numerous chase scenes, explosions, gunplay and violence to keep any 14 year old boy wide eyed.

4/ “That could NEVER happen” lunacy.

Hey it’s the movies, they don’t have to deal in real life.

–         This is how a star player can take a phonecall from a payphone at half-time in an NFL game.

–         This is how the same guy can take a pistol in his waistband onto the field of play in the same game.

–         This is how misspelling a word can inflame the guys in the other car because the misspelled word means “Fuck You” in their language.

–         This is how Halle Berry is a stripper and no-one gets shitty when she is dragged from the stage before we get to see the goods! 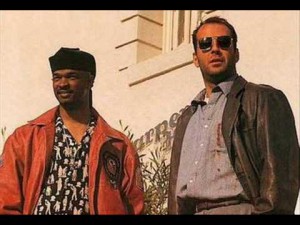 Bruce Willis in a film that requires him to smirk a lot and crack bad jokes in a dry and sarcastic manner. Damon Wayans in a role that requires him to seem out of his depth. Both roles play to the actual nature of the actors, that’s how their everyday existence goes. (I like both guys, but Willis does smirk too much and Wayans just isn’t that commanding or forceful as an actor.)

In her youthful yet-to-be-discovered prime. Young, keen to impress, perhaps a little naïve? Playing the stripper girlfriend of Wayan’s character!

Surely they could have allowed her to finish the strip before they have her riddled with bullets? It’s an R Rated movie after all.

An opportunity missed for what could have been immortal cinematic nudity.

Final Rating – 8.5 / 10. You can be imperfect and still be great. This film has a few logic holes, some jokes fall flat and at times it tries a little too hard, but it is nonetheless an extremely funny and action packed action-comedy.

Which I think is the aim of putting those two words together in the first place, isn’t it?