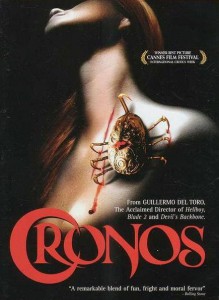 In Guillermo Del Toro’s first feature length film Cronos it is a bug-powered mechanical device and not a drinking vessel or magic fluid that “gives you wings” – but in typical GDT style nothing comes without sacrifice or a bit of blood, and there is a liberal dosing of bizarre imagery and some generally nefarious activities on display.

After a short preamble describing the Cronos device which is alleged to bring eternal life but was lost long ago – rumours are that in the last few decades it was the only thing that kept the Sex and the City girls alive and in high heels – it shows up in the present day (well 1994) in Mexico in an antiques store.

The owner of the store, Jesus Gris (say it a few times and you’ll get it) finds it by chance with his granddaughter after noticing that a new item on display perhaps wasn’t as innocent as it seemed.

Unfortunately for Jesus – but luckily for the film – others are actively seeking the device on the orders of a wealthy elderly recluse who knows the legend of the Cronos device and the power it contains. The gentleman is not only old but terminally ill, and he and his nephew played by Ron Perlman have the proverbial feelers out performing an extensive search.

In short he wants the device… badly.

By the time word gets back to the wealthy shut-in Jesus already has his hands on the device and is positive this is no tacky piece of junk. While cleaning the Cronos Jesus inadvertently activates it, after a moment of amusement at seeing some unexpected whirring and clicking the device snaps into action, driving a sharp metal fang deep into his flesh and bringing much blood. The next morning though far from being sore and sorry Jesus is amazed to see that his wounds are practically healed, what’s more he feels more vibrant than ever, youthful and invigorated.

In celebration he shaves off his mustache – others might buy sports cars, each to his own I guess.

Now Jesus is obviously no dumb bunny, he adds 2 and 2 together and guesses the device is responsible for his new vitality so he immediately hides it from others. He then heads back to the antique shop to find out that others still want it… badl-ier.

The remainder of the movie has Jesus and the pursuers of the device meeting and playing a game of cat and mouse. Both want the device for themselves and both are desperate to get their hands on it – only one man has more tools at his disposal and perhaps more personal desperation.

Ron Perlman is fine as the somewhat downtrodden nephew who can’t seem to grasp – or perhaps has not been told – the power of the small trinket that he must relentlessly pursue. There is much evidence though of how little he values human life in any case, even that of his uncle.

Cronos lacks some of the immediacy of say The Devil’s Backbone or the commercial appeal of Pan’s Labyrinth and of course the Hellboy‘s and Blade 2s, but the now familiar Del Toro fascination with mechanisms and macabre imagery are on full display, with a scene in the mortuary being especially graphic, and after Jesus undergoes a fairly radical life-seachange the effects and plot change is quite dramatic. Also who else but maybe Cronenborg would make the decision to put a bug in the device and not just leave it as a machine?

More than a decade ago I found Cronos quite fascinating and it remained with me for a while. While time has reduced its impact a little it is fair to say that even if it is viewed as the work of a cinematic “rookie” it is clear and obvious that there is great vision and flair behind it all, and that better works were to come.

In fact now even late in Del Toro’s second decade as a director I still feel that his best is ahead of him, even though he has already built an extremely solid resume and attained some commercial success.

Final Rating – 6.5 / 10. Eye-catching visuals and some standout moments overcome what is in reality quite a flawed plot.