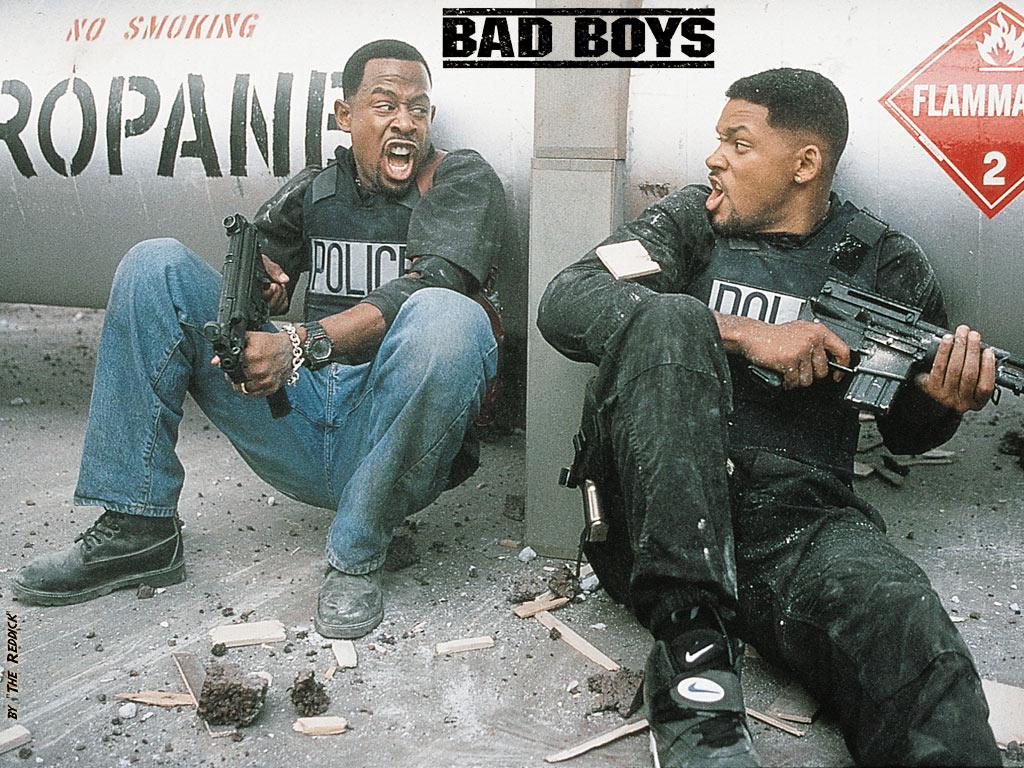 Bad Boys was his first film, and it has all of that, well maybe a few less giant robots than normal. Does Will Smith count? 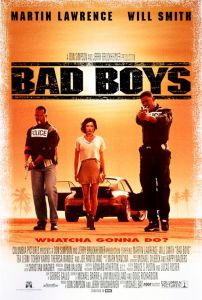 First I must point out that Martin Lawrence’s name precedes Will Smith’s in the opening credits. The first and last time that ever happened anywhere. And it shouldn’t have happened here…

Mike (Will Smith) and Marcus (Martin Lawrence) are two streetwise and super cool Miami DEA cops. Marcus is the fast talking family man with a wife and three gorgeous kids, Mike the smooth and charismatic single ladies man. Both talk wall to wall bullshit, only Lawrence’s eyes are perpetually bugged out, while Smith’s are sleepy and vulnerable, his ‘bird with a broken wing’ act.

The plot is your usual one for these films. Bad guys steal impounded drug stash, Marcus and Mike have only a few days to get it back before the department is disgraced, and only have one witness in the shapely Julie (Tea Leoni) to help piece together the clues.

Amazingly enough in a film with numerous deaths, car chases and explosions, it is the death of Mike’s favourite hooker that escalates the urgency of the pursuit. Apparently they wuz in love… Yes, Shit just got even more forced. Mike’s Brow furrows, the camera zooms in, Marcus gives the one blank quizzical look that is apparently the entire scope of his ‘acting range’.

From now on, no-one dies at normal speed.

But the ‘serious faces’ don’t stay on for long, not with the mountains of comedic gold on display. Mike and Marcus exchange quips with themselves, their colleagues and even their boss. There is a lamentable scene which takes place in the police gym’s basketball court, where the old, uncool and yes ‘white’ boss berates the flashy pair and demands greater discipline. Of course old white guy misses 47 consecutive shots and is awful to the point that you wonder why he even tries to play basketball in the first place, before Mike coolly picks up a ball, drains a jumper, lands a quip and walks off.

Mike and Marcus wear expensive clothes and drive expensive cars in the pursuit of bad guys who refuse to go down without a hail of bullets, a screech of tyres and large explosions. Suits the guys. Suits Bay’s lust for ‘BOOM!’ Suits the more easily pleased viewers, and just in case it’s all too subtle, Julie acts as the translator for the entertainment impaired, reacting in overly theatrical manner as a guide to the masses.

Read along kids: “Oh you guys are crazy” “Gee you’re driving this car real fast” ‘My, what a large and expensive explosion. We should all react favourably and with the requisite awe”

There is an extremely tired and lazy subplot that drags on for about an hour where the yammering Marcus must pretend to be the effortlessly and pimpin’ Mike to fool Julie, while Mike stays in Marcus’ home with the family. Only Marcus’ wife can’t find out, because that would be… I mean it would end… by that I mean I can’t afford to let her…

It’s excruciating and decidedly unfunny stuff. As are 97% of the jokes here. Michael Bay might actually have a handle on making things go boom and filming cars going fast, but his version of comedy is hopelessly out of touch.

Funniest of all though is the series of outfits that Marcus wears through the film, all allegedly in the name of fashion. He looks like the child of a rich parent who treats her toddler like their own personal dress up doll; think Hollywood actor’s kids at the park photographed by paparazzi that the celeb called in advance. And anyone who thinks the little kid with the do rag, leather pants and sleeveless vest is cool is themselves an idiot.

In fact the primary flaw in this film – and the second – is the misnomer that Martin Lawrence is anything more than a sitcom actor. The mugging, the raised eyebrow and lip dumbstruck combo, the irritating yapping, all might work in 22 minute blocks, but expecting him to maintain the façade for two hours is a tall order for such a short and limited actor. Will Smith might be no gunslinger. Tea Leoni is no sexpot. But Martin Lawrence is so far away from being an action hero – or even an action sidekick – that it isn’t remotely funny. And neither is he.

Ultimately this is a hack’s version of a masterpiece. Michael Bay watched enough films to lift the bits he likes and more importantly the bits teenage boys like. Poor old Tony Scott would be rolling over in his grave at the blatant thievery of so very many of his tricks. Bad Boys was perhaps the first two hour music video. It has amazingly expensive sets, dancing girls in shrunken clothing, the constant presence of awful background music, smooth black guys in tailored suits driving fast cars, and all in a plot that could be completed in four minutes.

Despite that it’s mostly harmless stuff. Sure I didn’t laugh once at the comedy, I didn’t gasp once at the action, and I only grimaced for the 25 or so minutes where the delightful mistaken identity routine was centre stage, but that isn’t enough to consign a film to irrelevance. Neither is it sufficient to label Bad Boys as anything other than a cheesy unfortunate knock off of so many better buddy cop films.

Final Rating – 5.5 / 10. I worry about anyone who has this film in their collection for anything other than ironic purposes. 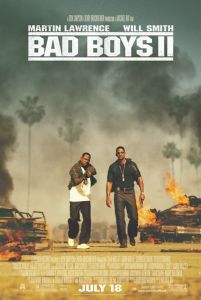 Is that Henry Rollins as a DEA high up? Cancel all wondering, the laziness is back!

This time around the hilarious secret that we must keep is that Mike is banging Marcus’ sister Sid (Gabrielle Union), herself an undercover cop. Oh the yuks we will have with that one.

The pair find themselves once again in pursuit of a nasty and vaguely foreign drug cartel, leading to another week or so of driving fast around Miami firing automatic weapons about the place. They dress as tradesman to infiltrate the drug lord’s heavily guarded headquarters, and spend fifteen minutes roaming the place searching for clues, after the Big Break arrives in the form of rats eating the drug money…

…oh will someone save me from all this stupidity?!?

This time around the film is even more obviously divided into 140 minutes (two cds worth) of four minute hip-hop videos, each with their own vaguely samish location and cast as the last.

It’s actually astonishing how same this movie is to the former, all the way down to the guys needing to swallow their pride and asking for help from the rival cops in order to rescue the damsel in distress.

Once again it’s hilarious ironic that ‘Shit gets real’ again, just as the film embarks upon its more unrealistic sequences. “So, what you’re saying Mike and Marcus, is that at best we’re about to lose our jobs and waste millions of dollars, and at worst we’ll do that and be killed, all for someone we don’t even know?” Well of course we are.

Martin Lawrence sensibly reigns in the ‘ha-has’, replacing them with shocked expressions and an over-riding mood of reluctance, which as a cop being unwilling to face danger and conflict alongside your partner is most assuredly a good thing right? Smith beefed up considerably for the return of Mike Lowry, but his performance screams that his work in the gym was enough effort for the paycheck.

The action here is actually better. Bay’s one strength is car chases, which worked in The Rock, The Island and here. The bridge car chase, while being incredibly similar to the one in The Island, is hands down the best moment in the Naughty Guys franchise. In fact the only good moment in either film.

Again the ‘comedy’ sequences kill the film. In the Lethal Weapon films the banter that went back and forth between Riggs and Murtaugh was light and breezy, not especially hilarious, but it wasn’t meant to be. It was more to illustrate chemistry and comfort. Mike and Marcus play every regrettable clunker like it’s the closing joke of an hour long Chris Rock stand up special, like it should have the audience standing, whooping and cheering, despite the fact that it is only mildly amusing at best. (Actually maybe that describes the Chris Rock show as well. I mean “I want the big piece of chicken!” as a closer?)

Bad Boys 2 is much more of exactly the same, which is to say it’s a more expensive example of pointless.

Final Rating – 6 / 10. Still impossible to like, but the car chase on the bridge is at least something.

Michael Bay is the world’s worst puppet master. He makes Mike cooler by making Marcus geekier and more nervous. He thinks dramatic camera work indicates dramatic action. He thinks glossy sets drive the plot, that flashy outfits lend credibility to the character, that exaggerated reactions are the bellweather of comedic genius. Bay feels he can make any scene serious and important just by slowing down the action and performing a couple tricky camera zooms.

And for the most part teenage audiences believe him. They’re the ones who profess to liking ‘whatever is on the Top 40’, to whom ‘biggest box office’ means ‘best’, that ‘most expensive’ means ‘most deserving’. Sure a few years later the brains develop, the taste improves and the discretionary capacity is greatly enhanced, but it’s these herdlike years that pad Michael Bay’s pockets. If he does nothing else – and he doesn’t – Michael Bay might just be the man most responsible for ushering gormless teens into discerning young adults.

Everyone has something from their teens that they initially embraced but came to regret. It made them think. Made them grow. Hopefully made them think for themselves.

Michael Bay has hand crafted a dozen such fast trackers. While we should all rightfully loathe his Armageddons and Transformers, we should ultimately thank this man who is single-handedly fast tracking our mindless kids into people who want more from life, starting with their twenty dollar movie ticket.