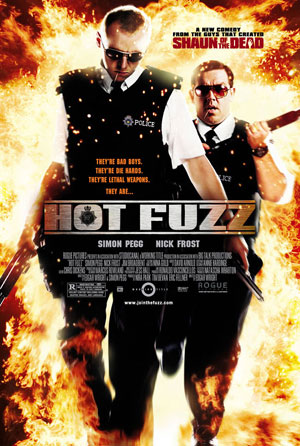 Another outstanding effort by Simon Pegg and Edgar Wright, the gents who made Shaun of the Dead and again starring Pegg and Nick Frost, with a cavalcade of great character actors.

This time Pegg is a straight laced cop named Nicolas Angel who has such an outstanding record in London that he makes all other cops look bad, so he is sent to what is probably the most quiet village in England so as not to embarrass the rest of the force. (His first “case” is to catch a swan that has escaped its enclosure.)

Upon settling into the village of Stanford he meets the decidedly less focussed local police force and the members of the community who have a deep desire to maintain the status of Stanford as the epitome of excellence in rural England. These seemingly upstanding citizens appear and reappear through the movie, especially the crappiest Bond, Timothy Dalton as the local supermarket owner who seems to be everywhere just before or after an incident occurs. (Side note – Although Dalton apparently sucked it up as 007 I can’t help by think Pierce Brosnan dropped a notch with the new Loreal commercials, “campaigning to save the environment” ughhhh.)

As the “accidents” become more frequent Angel becomes increasingly involved in proceedings and also increasingly disillusioned with his fellow members of the force. There are several moments of stylised violence that would be pretty shocking if they weren’t so funny, and once “shit just got real” Angel snaps and the movie escalates into a 20 odd minute smorgasbord of shotgun-wielding, rootin’ tootin’ over the top action, which matches most of the movies that the first 3/4 of the film parodies.

What separates this from so many other flicks is the obvious care that the creators have taken at every step of the game, from the script to the casting to the seemingly accidental touches that frequent the film, (for those that saw SOTD you know nothing is an accident).

The supporting cast are all excellent, with many being recognisable from numerous British comedy shows and movies. It seems obvious that both Pegg and Wright watch a looootttt of movies and set out to make something that they would like to watch which both spoofs and honours the buddy cop genre simultaneously.

In Summary: Hot Fuzz is equal parts comedy and action flick, with a fair crossover of both styles throughout. Aside from the stars there are numerous worthwhile cameos that actually add to the film and Pegg and Frost share an effortless chemistry.

I don’t like to compare films but put simply if you liked Shaun of the Dead you’ll love this.