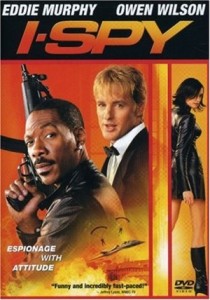 Alex Scott (Owen Wilson) is a mediocre spy, jealous of the better credentialed, better equipped and better-looking around him.

When he teams with a (literal) heavyweight, the undisputed boxing World Champion Kelly Robinson (Eddie Murphy), who boasts not only a 57-0 record (often), he also boasts about just about everything else that one man can boast about.

The impossible duo try to utilize Robinson’s fame and renown to gain access to a top secret US spy plane that has been stolen, using an upcoming Robinson fight in Eastern Europe as cover. Famke Janssen is also on board as a co-spy and love interest.

Fortunately to fast track proceedings the new bout for World Title clinching 58-0 is being hosted by Gunders (Malcolm Macdowell), the very same bad guy that is selling the plane to the highest bidder – he too is using the fight as cover.

Being a long time Champion Robinson is used to being fawned over and getting things his way, he lives ‘the life’; jewelry, stretch limousines, private jets, referring to himself in the first person constantly, transvestites… (whoops confusing real life and movie life there). Robinson and Scott argue over who is controlling the mission, Robinson thinks he should as he is the bigger name, Scott thinks he should because, well he’s the spy and all. Scott tries to seduce Robinson into doing things his way by showing him the spy-toys and gadgets, only to repeatedly learn that the only thing to seduce Robinson – is Robinson.

I-Spy is heavy on the light comedy, and light on the heavy action, choosing to favour and rely on Wilson’s ‘Awww shucks’ likability and Murphy’s bravado. It is a combination that very nearly works, this is Murphy’s best film since Bowfinger, and his cockiness and misguided self confidence complements Wilson’s ‘Wilson-isms’.

The ridiculous action is pretty fun, frivolous and forgivable given the chuckles that it elicits, but it must be said that the final 15 minutes are not so successful, and ends the film on a flat note.

I-Spy has a couple of genuinely funny scenes, lots of inoffensive action and enough bright colours to keep most amused. It is the perfect low key Sunday arvo DVD, where it doesn’t matter if you sleep through 25 minutes or so.

Final Rating – 6.5 / 10. I-Spy is a diluted version of many other admittedly better mismatched buddy action comedies. It is a shiny expensive forgery of a superior original, but that by no means makes it worthless. Another film that might be tough to choose, but easy enough to watch.