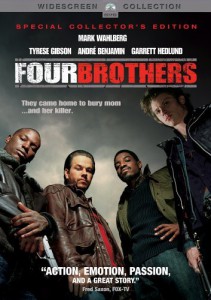 Far from the start of a bad joke setup this is actually a key element of this film.

The four guys were all children from troubled or unfortunate situations taken in by the same caring lady who raised them as solid citizens – or at least better than how they may have turned out – a couple of the lads are still quite rough around the edges. The four have grown and gone their separate ways and blazed their own personal trails, they are brought back together after the untimely death of “Ma” in an apparently random shooting in a Detroit convenience store robbery.

With Ma’s funeral looming the four boys all arrive home to pay their last respects:

Jack – A somewhat introverted musician. Cops some flak as the other boys (Bobby at least) openly ponder if he’s gay.

Jeremiah (Andre “3000” Benjamin) – The most successful of the quartet. A businessman developing his own premises with a stable home, wife and family. He is affable, honest and ambitious.

The early going has the boys reminiscing about their childhood and their time with Ma, in one particular scene they all have extremely vivid visions or recollections or what life was like with her around. In fact the entire first 40 minutes play out slowly with a fair element of emotion and character development, the boys joke, bicker, (play)fight and discuss what was and what might have been.

Then Bobby announces to one and all that they owe it to Ma to find out exactly why she died and who is responsible, then this carefully constructed “family drama” all of the sudden turns into a straightforward shoot ‘em up kill the bad guys affair.

The early investigations are relatively low key – at least compared to what follows – but they do raise enough dust to bring the attention of the local cops who, are already familiar with the boys due to previous dealings. The cops (Terrance Howard and some other guy) warn them against starting their own personal revenge war.

It seems the lads just don’t listen. The second half of the film has running gun battles including one that essentially destroys their childhood home. There are shootouts, car chases and multiple killings – essentially enough bad stuff for them all to be arrested 447 times.

Ultimately they follow the trail to the real killer, which leads to another massive scale gun battle and other events that overstep the realms of plausibility… by about 15 steps.

Four Brothers starts with a reasonably serious tone, but finishes with a cartoony second half and some jaw dropping plot holes or at requires leaps of logic that are hard to take. The four boys do well to keep a straight face through most of it and the performances are all OK, Sofia Vergara is suitably over the top – both in performance and tank top – in her role as Angel’s screeching hot tempered girlfriend, and the “Bad Guy” is suitably menacing, if perhaps the most cartoony of all.

Final Rating – 6.5 / 10. I’m not sure if I am that disappointed with the fact this film takes a turn towards the ludicrous, the second half is definitely more entertaining even if it seems to be at odds with the patient build up of the first half.