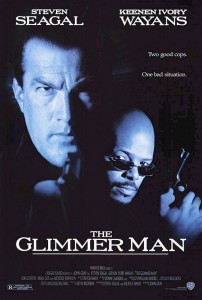 The Glimmer Man overcomes so many burdens and flaws to very nearly crack worthwhile status. For a start it ‘stars’ Steven Seagal and allows him to indulge all of his usual ludicrous preferences, including his famed ‘mysticism’ and tendency to deliver the most inane dialogue with the same seriousness and grandiose style as a reality TV judge appraising the most recent talentless hack.

“You so owned that Dog.*Sniff* You’ll be a huge star out here. Mark my words.” Sincerely: Some guy/gal you’ve never heard of who never achieved anything.

Seagal is Lt Jack Cole, brought in to help Detective Jim Campbell (Random Wayans) in the case of ‘The Family Man’, a serial killer so named by his proclivity for X-ing out entire households in bloody religious rituals.

Within minutes of being on the case Cole has leapt 30 feet horizontally – pony-tail flying – to save a suicide, and decided that the most recent of the 8 families slaughtered is actually the work of a different killer. He’s also managed to piss of the Russian mob, annoyed the other cops who can’t understand his spiritual style (and the fact he is a complete tosser).

Then Campbell discovers that Cole’s ex-wife is among the most recently slain, and Cole becomes a suspect in his own case.

As Cole himself says at one point late in the film, “Why is this gotta be so complicated?”

An aside; Consider that Cole wears Native American Indian adornments, Nepalese beads and quotes both Buddhist and Christian sayings along the way. How spiritual is too spiritual? Maybe pick a lane and stay with it Mr Cole?

Despite all of this pretentious window dressing there are a few moments in The Glimmer Man that work well, and while I can think of no two guys less likely to hang out in real life Seagal and #14 Wayans share an awkward chemistry so flawed that it actually adds value to proceedings, as both try – and fail – in their own inimitable way to crack numerous pathetic jokes. In fact like most Steven Seagal movies I found myself laughing at him more than with him.

But to paraphrase President Schwarzenegger Seagal is here to smack, not crack. It’s easy when watching this leather bag with eyes as he butchers the English language and common sense to wonder how he got into film in the first place, then he pistol whips two guys, breaks a few limbs and parlays his epileptic praying mantis fighting style into a couple of superior fight scenes.

Then you black out, waking in a DVD store with another Seagal movie in your hand and a tinge of advance regret already filling your senses as you sheepishly pay the $2 to the nice 23 year old loser who mistakenly thinks he is the next Tarantino.

Final Rating – 6.5 / 10. A guilty pleasure. I don’t think you’ll be rushing to Facebook to update your status to ‘Watched The Glimmer Man’, but it’s a reasonably painless 90 minutes. Listening to Seagal do the DVD commentary might be another story.