Welcome to the Jungle AKA The Rundown (Review) 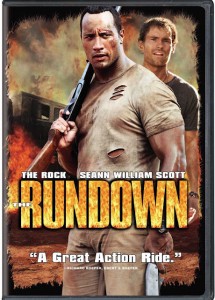 The Rock is carving out a decent niche as everyone’s twelfth favourite non-descript wrestler turned actor. But in a market so bereft of non-Statham action stars I feel he should be doing a lot more to use those big muscles to plonk himself at the top of the action movie heap.

I mean it can’t be too hard to topple the throne currently occupied by Schwarzenegger and Stallone’s creaking and scientifically engineered muscles? Can it…?

At least with Welcome to the Jungle (AKA The Rundown) he tries.

Beck is very good at his job and especially confident, assured enough in his own abilities to offer every ‘repossessee’ Options A and B.

However the retrieval game has lost much of the allure for Beck, and as a one-off, last-time job he descends down the map to South America to bring Travis Walker (Sean William Scott), the AWOL son of Beck’s scaly former employer back to his Daddy to face whatever music he has brought upon himself. (Knowing Sean William Scott it would probably be Nickleback.)

Beck travels deeper and deeper into the Amazonian jungle in search of Travis, a known treasure hunter, ending in the clumsily named El Dorado, more importantly the stomping ground of Hatcher (Christopher Walken), a gold mine owner with precious few scruple about how he manages his investment and how he treats his employees.

With only a brief moment in which to meet Mariana (Rosario Dawson), the feisty and intrepid barmaid – who couldn’t possibly reappear later could she? – Beck promptly pisses off Hatcher and his large entourage of the menacing and dangerous, before grabbing Walker and fleeing into the thick jungle, pursued by Hatcher’s men, local rebels… and face humping monkeys.

The Rock and Sean William Scott are surprisingly enough the perfect pair, an idiot blabbermouth teamed with a no fuss drill sergeant of a man. One strides, the other stumbles through the jungle.

Beck treats Walker like a 5 year old who has been pushing his buttons all day (trust me I know), cutting off his blatherings, shortcutting his many distractions and continually – and in this case forcefully – pushing him back into the right direction. For his part Sean William Scott is in his element also in a role that requires that he yap incessantly and be continually annoying and aggravating.

Welcome to the Jungle was surprisingly enjoyable. Perhaps as much due to the fact that quality action comedies are very thin on the ground these days, but I enjoyed the combination of Romancing the Stone/Indiana Jones with an all too brief Commando ending. While the comedic elements were a little more prevalent than the action the fight sequences were good too, for a change falling down a mountain actually looks like it might hurt a little!

This left me with, as Beck might proffer, two Options.
Option A: Take things way too seriously. Prejudge the outcome of the ex-wrestler and the American Pie bonehead and either miss out or sleepwalk through the film; or…

Final Rating – 7.5 / 10. You’re probably wondering about the face-humping monkeys. I have deliberately left them as a tease. You should watch the film to see them. Actually if you like action you should just watch this film. It really is pretty good.