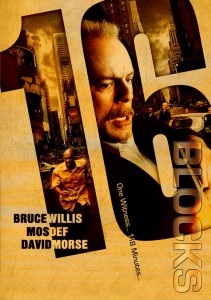 The last thing Jack Mosely (Bruce Willis) needed after pulling an all nighter was overtime. Already drained of energy and desperate for that refreshing 8AM drink that only alcoholics could appreciate, Jack resisted as long as he could before succumbing to what on the surface should have been little more than a taxi service.

Jack should have faked a heart attack. Or better yet simply shot himself.

With ‘118 minutes to transport a defendant 16 blocks’ to the courthouse, Jack finds little reason to get to know what is essentially an annoying package named Eddie Bunker (Mos Def).

Of course this perspective is changed a little when scarcely 11 minutes later bad guys are trying to gun him down in the middle of a crowded city street in broad daylight. The desperate urge for a beverage is not.

Worse is to come when Jack realises that the bad guys are actually bad cops, lead by his ex-partner Frank (David Morse). He and his crew are extremely concerned that Eddie will spill the beans and expose their inadequacies as law abiding peace keepers.

Even though Jack and Eddie elude the initial assault there are still three distinct facts of great concern to Jack; the bad cops know exactly where they are headed and when they are due. And Eddie is still with Jack…

I love Mos Def as a rapper. I own many of his albums and admire his effortless and clever rhymes. I have little opinion of Mos as an actor, I hated The Hitch-Hiker’s Guide to the Galaxy but didn’t give too much thought to his effort there. 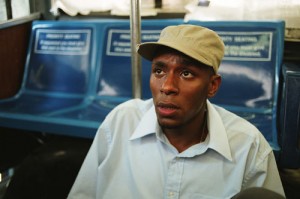 You heard me; ALL YOUR FAULT! Now sit there and be quiet.

I hate Eddie Bunker. I am positive that Eddie is supposed to be a whiny and talkative inconvenience to Jack, not the unbelievable aggravating character he is here. For some reason Mos employs a voice best described as obnoxious and a cadence reminiscent of an over-eager kid, stumbling over himself to blurt out pointless facts and questions in that voice that made my toes curl.

Without Mos – or at least without that voice – I would have happily espoused 16 Blocks as ‘worthwhile’ and moved on to the next paint by numbers Bruce Willis movie. But knowing what I know I can’t deliberately suggest you watch this movie, which is otherwise fine. I dread the passage of time that will inevitably cloud my recollections, leading to another viewing in the future and more nails screeching down the chalkboard in my mind.

Back to the movie, sequence after sequence of bang. Bang. Bang. Bang. Etc, all executed with great efficiency by Richard Donner (Lethal Weapon) and validated by a typically Willis-ian performance from Bruce Willis.

In between the rolling shootouts, hostage situations and Mexican stand-offs, spare a moment to wonder if the US legal system could really be as screwy as it is portrayed here.

Final Rating – 6.5 / 10. 16 Blocks should be another barely worthwhile lazy weekend afternoon flick like Hostage, Mercury Rising or even Hart’s War. Did Mos Def fuck that up? He Mos Def did!

While I try to throw a joke or two into proceedings when I can all of the opinions presented in my reviews are genuine. I don't expect that all will agree with my thoughts at all times nor would it be any fun if you did, so don't be shy in telling me where you think I went wrong... and hopefully if you think I got it right for once. Don't be shy, half the fun is in the conversation after the movie.
View all posts by OGR →
This entry was posted in Bruce Willis, Film, Movie Reviews, Superstars, The Grey Area. Bookmark the permalink.