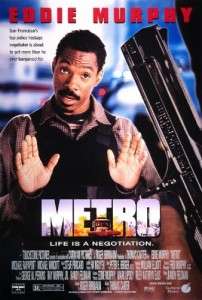 In Metro Murphy plays a streetwise police negotiator in San Fransisco named Scott Roper, in fact the best negotiator on the force. Roper’s track record in getting hostages out alive is the envy of his colleagues and allows him leeway with his superiors. Unfortunately the stress of the job meant that Roper became introverted and shut out everything around him, including his girlfriend Ronnie who ultimately left him when he started gambling heavily as an outlet.

Enter new partner Kevin McCall (Michael Rappaport), a young rookie straight from training who despite being highly skilled is raw and un-streetwise – if that were a word.

Metro has two good scenes and one decent character. The two good scenes are a long chase that takes place on the San Fransisco streets and uses their tram system to full advantage, the second such scene is a training montage that lasts maybe two minutes and allows Murphy the freedom to go a little wild by creating a made up criminal for McCall to negotiate with.

The decent character I haven’t touched on yet, but given that the film is about a hostage negotiator it seems fairly obvious that there need be someone for Roper to test his skills on.

That someone is Michael Korda (Michael Wincott), a man with dark sunken eyes, the emaciated appearance of the undernourished and the gravelly voice of a chain smoker. His hard as nails, emotionless performance as a potentially insane, definitely dangerous Korda is thankfully lacking in hamminess or over-acting, but overflowing with menace and intensity. It is not the end of the world that the bad guy in a film is by far the best thing in it, but in an action comedy with not enough of either, where the bad guy in reality is the third or fourth banana it simply isn’t good enough.

The strength of Korda’s characterisation and a fairly brutal development results in some genuine animosity between the pair, which makes the inevitable stand off near the end somewhat more bearable, even if it is laced with logic flaws and some mediocre action sequences.

Ultimately Metro ended up only marginally better than A Vampire in Brooklyn, by trying to play against the ‘typical’ Eddie Murphy movie they managed to create a film only marginally different, but one lacking enough of anything to make it worthwhile.

Final Rating – 6 / 10. The perception of intensity, the allusion of humour and the delusion of adequacy. Eddie Murphy takes a stab at semi-serious and fails. I don’t hate Metro, but aside from a cool villain there is nothing to love.