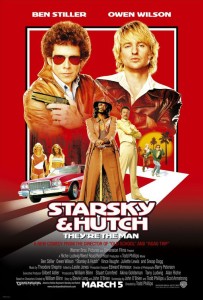 In the still swinging 70s Bay City (NOT San Fran Cisco) was the place to be. The music was ok, the ladies still in their original non-Dr assisted packaging, the cars especially beastie and the policemen allegedly funky.

Not so much here though. This unnecessary remake / reboot whatever of the 70s cop show no one was busting to see again is a clumsy hodge podge of unfinished ideas.

The two mismatched cops made partners in Starsky (Zoolander) and Hutch (Hansel) is so inept it doesn’t know which partner is the ‘cool one’ and which the ‘not cool one’. Sure Hutch starts out superfly but it socialites frequently. Then there is Vince Vaughn as the nasty drug dealer type who also alternates between vicious and cold blooded and amenable and light hearted – often in the same scene.

Then we have the two bimbo cheerleaders who pop in and out of the film (and their tight t shirts) as needed, and some henchmen who actually generate a few laughs in their first scene – so of course they are not heard from again.

Of course Snoop Dogg’s appearance as the streetwise funkier than thou ‘man in the know’ Huggy Bear was a casting masterpiece, but my 90-sum year grandma could have told you that – and she probably doesn’t know who Snopp Dogg is. (Well she might know Gin and Juice, but not his newer stuff…)

The only thing full bore here is the car that these two throwback hacks drive. The rest stops just shy of a Full Bore, but it’s a disappointingly neutral effort with heights best described as ‘middling’.

There are films released each year by skilled artists that fail either critically or at the box office for reasons unknown. These films are often impeccably and carefully crafted, but just don’t find their niche or mesh with the audience. Starsky and Hutch just might be the output of skilled artists, but it is the output of said artists simply killing time.

Stay tuned for Starsky and Hutch 2: Zoolander and Hansel Get Paid Again.

Final Rating – 6 / 10. You know those lazy Sunday films where you nod off half way through and can’t remember where you left off? I was wide awake throughout Starksy and Hutch; and I still had that sensation the entire time.