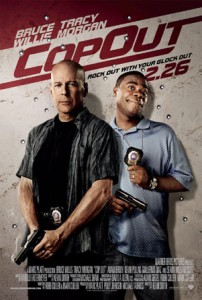 Never has a title been more apt…

…unless they changed it to “Bad Idea”. Or perhaps “Shit Sandwich”.

It will only infuriate me to describe this with the honesty and care that it deserves, for all the wrong reasons, so I will bullet point my thoughts.

Jim and Paul are cops, partners of 9 years. Jim’s daughter is to be married and he must sell his valuable baseball card to finance the dream wedding and not come across as a schmuck to the daughter, ex-wife and loaded new hubby, only the card gets stolen and he must cut a deal with a criminal to get it back.

I have never seen…

Speaking of comedy. Things that they try to pass off as funny…

Reasons why Tracy Morgan is the black Will Ferrell…

Reasons why Bruce Willis is in Cop Out…

(I can’t think of another one.)

Reasons why Cop Out sucks much balls…

Final Rating – 5 / 10. When Sean William Scott is the funniest thing in the movie and you still can’t wait for him to die, something is wrong.

While I try to throw a joke or two into proceedings when I can all of the opinions presented in my reviews are genuine. I don't expect that all will agree with my thoughts at all times nor would it be any fun if you did, so don't be shy in telling me where you think I went wrong... and hopefully if you think I got it right for once. Don't be shy, half the fun is in the conversation after the movie.
View all posts by OGR →
This entry was posted in Bruce Willis, Crappy Movies, Film, Movie Reviews. Bookmark the permalink.