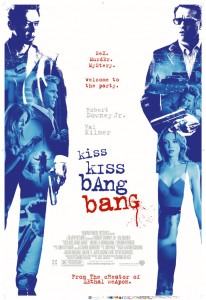 At the very least Kiss Kiss, Bang Bang tried its level best to steer itself down a different route to the norm, eschewing and laying bare to many Hollywood clichés in the process, unfortunately a somewhat necessary by-product of this decision is the inclusion of several eye-rolling coincidences in order to allow all of these incredible events to follow each
other.

Robert Downey Jr is Harry Lockhart, a small time criminal turned aspiring actor thanks to Mindblowing Coincidence (MC) #1, he attempts to protect the virtue of a hapless woman at a ‘who’s who’ party hosted by socialite Harlan Dexter (Corbin Bernsen) in the Hollywood Hills.

The girl, Harmony (Michelle Monaghan) happens to be a childhood friend – and crush – in MC #2. I mean he sawed her in half one time!

MC #3 introduces Harry to Hollywood Private Investigator Perry – or ‘Gay Perry” as he is derisively referred to – often. The initial meeting is supposedly to help Harry prepare for a role, however in the 90 minutes that follow it means that they will bump into each other several times over the course of the next few days, it is during these key few days that a
mystery threatens all of their lives and envelops seemingly half of Los Angeles.

But given that this was written and directed by Shane Black, the man responsible for the similarly outlandish and even more mindlessly entertaining The Last Boy Scout we should not be surprised. Despite the leaps of faith and constant convenient moments of good fortune or misfortune (depending on what is required to further the script at the time) Kiss Kiss Bang Bang moves along at a crackling speed, the only thing that piles up faster than the bodies are the witty remarks and dry as kindling put downs, usually between
Harry and Perry.

Eventually the unexpected coincidences become so expected that they become part of the charm of this offbeat action/comedy/thriller combo. The three leads, Downey Jr, Kilmer and Monaghan are all excellent, Downey Jr is in his element as the out of his depth Lockhart, and he delivers one of the better voiceovers that I can recall in a film.

As with The Last Boy Scout it is all ultimately a little too much to swallow hook, line and sinker, and the lack of action hurt a little, but you’ll go a long way before you come across another film quite as clever or as ambitious as this one.

Final Rating – 7.5 / 10. Don’t let a few unlikely coincidences spoil a filmas clever, funny and enjoyable as this one. Preposterously entertaining isn’t such a bad thing.