12 Movie titles that were ‘accidentally’ honest.

What’s in a title? Usually nothing, Tower Heist, The Smurfs, Puss in Boots, I could go on. 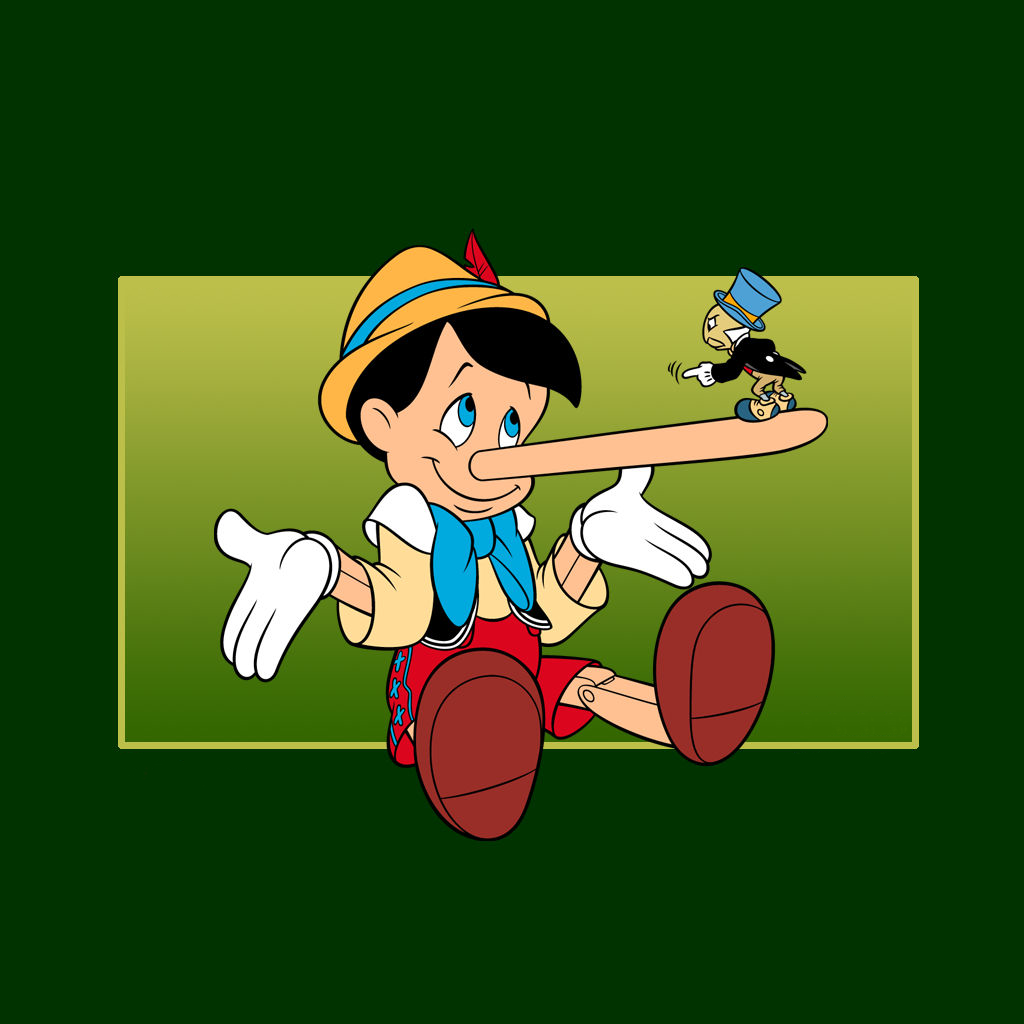 In reality the movie has sweet FA importance once you’ve bought your ticket, after that it’s all about the content. The poster and trailers are infinitely more important as they give far more of an indication as to what you might expect once the lights go down. This is why most titles are fairly generic and seemingly uninspired, once the trailer has piqued your interest they just want you to be able to be able to recall them easily as you step to the counter.

But over the last decade more than a few films have inadvertently told you more about their film than they intended simply through the title. Whether this was flawed marketing or subliminal irony I can’t tell, but most films tell you little more than the basics.

For example most titles tell you the main plot device or character, the first sentence gives three examples, The Girl with the Dragon Tattoo, The Avengers and The Three Stooges are a few more. Other titles take a little more info to realise their meaning, We Bought a Zoo gives you the basics, but I need more info, The Skin I live in could mean anything, and in truth I never got Attack the Block given that if anything the kids were defending it – unless they were siding with the inkblot aliens! Finally most sequel sub-titles are little more than differentiators between the practically identical films, …and the Kingdom of the Crystal Skull, …At World’s End, …Dark Side of the Moon, … 2.

Here are a bunch of films that go more than skin deep to tell you more than they probably meant to. Titles that tell you less about the plot, but more about the film experience for the viewer than the marketing department probably meant. 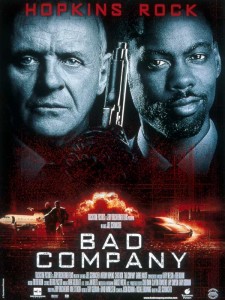 Look I’m sure Anthony Hopkins is the nicest, most gregarious and intelligent gent in Hollywood. I’ve seen many of his interviews where he comes across as genuine, smart as a whip and self-deprecating to a fault.

Chris Rock is one of the biggest and most revered names in stand up, with a devoted following and sell out shows in almost every city. He is similarly intelligent, warm, entertaining and obviously funny as hell.

But in this poorly conceived action comedy thriller from 2002 where they team up to locate and nullify a nuclear weapon in the wrong hands they provide two hours of Bad Company, both for each other and the unfortunate viewers who shilled for the ticket or rental. 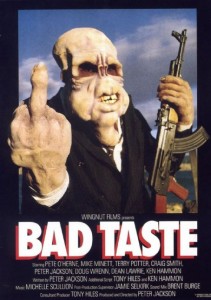 This one seems to be a deliberate double meaning, but Peter Jackson’s schlock and gore debut couldn’t be more aptly titled if it tried. Featuring vomit eating aliens (who need humans to replenish their food supplies), a savage infection carrying rodent and a lawnmower massacre finale here is a low budget film with something to offend practically everyone.

Of course once Jackson won a few critical plaudits with that little seen Lord of the Rings trilogy (you should check it out!) this was looked upon differently, because it was now a misunderstood work of genius. Maybe, but a genius who thought vomit eating aliens would be a good idea is definitely better served working with the scripts prepped by others. J.R.R. Tolkein was a good start. 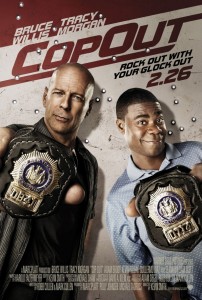 The funny thing here is that this dreck was originally titled A Couple of Dicks. This too would have been apt; Kevin Smith for thinking he has a commercial buddy cop action comedy in him and Bruce Willis for thinking Kevin Smith and Tracy Morgan were his tickets back to the top.

The fact that this original title was thought too *gasp* controversial and replaced is a cop out in itself, but the real evidence that the title was unwittingly spot on was the lazy, ineffectual plot and sub-par acting, script, jokes… everything that dominated the painful two hour running time.

As a Bruce Willis fan I was sad. As a paying attendee I was  dumbfounded that I could be so duped. 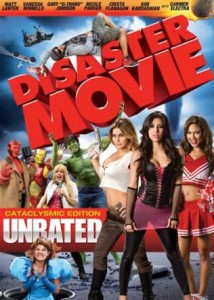 Never seen this trash, but consider these facts; ‘from the team that brought us Epic Movie and Meet the Spartans’, and ‘starring’ Carmen Electra, Vanessa Minillo and Kim Kardashian, three people who are more famous for their dating life than actually creating anything of value to society (that wasn’t a nude photo shoot or a sex-tape).

The only part of the title that I find even a mite dubious is the word ‘movie’, the rest is perfect. 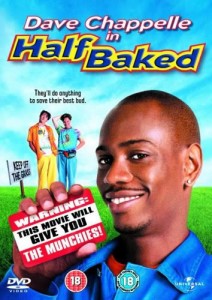 “Right, Dave Chappelle is a funny guy right? Let’s have him right something about stoners, give him a few comedians to work with and see what happens.

That enough ‘script development’ for today? I’ve gotta pick up the kids from soccer practise.”

I’m not sure if that’s the total effort put into putting together this film, it isn’t very funny (nothing featuring the execrable Harland Williams ever is or will be), not very creative and wouldn’t nearly be as discussed were it not for the fact that the writing team went on to create Chappelle’s Show.

That fact right now shows how dodgy this film was, if the same pair could be responsible for some of the most insightful, clever and flat out hilarious comedy in decades, explain this film!

It sure seems unfinished, incomplete, half baked…

(Will Ferrell is lucky I thought of Half Baked first, as Semi-Pro could just as easily have fit here.) 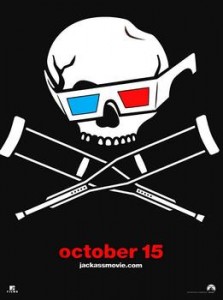 I’m sure that in the early days the title was the point; here are a bunch of jackasses. Enjoy.

Now the jackasses are the morons who find this vaguely credible entertainment and not the moronic actions of a bunch of wealthy gormless manipulators of the gullible.

(Sorry to be a little vinegary, these films shit me.) 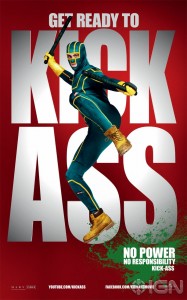 Finally a title that means two things and both of them are good. Kick-Ass is the titular decidedly amateur self-dubbed superhero in the film, but it could very well also be a description for the two hour cinema experience for the viewer.

Featuring hilariously over the top violence, characters who employed patently absurd logic and an increasingly over the top series of developments and events Kick-Ass… well… kicked ass.

The fact that many critics and lazy, out of their depth cinema goers panned it should be taken as a badge of honour, Kick-Ass wasn’t for everyone – it’s MA 15+ rating should have told some of the morons in the audience that early on – but for those in the right demographic mature enough to embrace the inanity and sheer inventiveness it sure was kick-ass entertainment. I await the sequel, which I hope will be suggestively called ‘Even more Kick-Ass’. 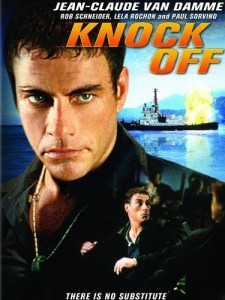 This Jean-Claude Van Damme / Rob Schneider ‘epic’ about a mismatched duo out to bust up counterfeit jeans and athletic shoe operations in Hong Kong is as blatant a copy of many, many other – better – action comedies as anything you could name in 25 years.

And just like the illegal merchandise that they try to prevent from sale, this Knock Off of a film is inferior, shoddily made and in every way a sub-par replica of thousands of genuine articles, and should be avoided at all costs.

Though the same could be said for every Rob Schneider film. 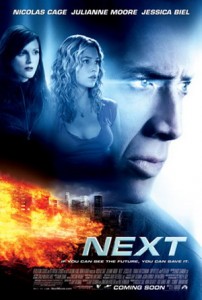 This one writes itself. While the film is about a Las Vegas magician with the ability to see events fated to occur over the next couple minutes before they happen the title is a more apt description of what the renter will say within the first ten minutes running time.

Despite the possibilities of the basic concept the film is a totally generic working against the clock snoozer with an inexplicable romantic angle between middle aged toupee-fanatic Nicolas Cage and uber-vixen Jessica Biel, this despite the fact Cage’s character is a suspect in some serious crimes. I guess chicks really love magicians.

(By the way I could just as easily listed Adam Sandler’s even lousier ‘Click’ here, as in the sound the remote makes when you eject the DVD, but I already have him on the list.) 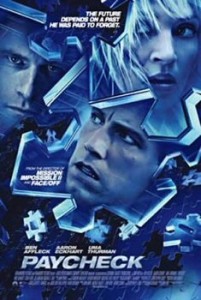 Another film I have actually never seen (since ‘fixed’), I did actually rent it one day before coming home, reading the back cover more carefully and placing it back on the ‘ready to take back to the video shop pile’, and let me tell you that rarely happens. I had wasting money, but I hate wasting my limited brain cells more.

So I have never seen this paycheck for Ben Affleck, the man who (as an actor) must hand over his bank account details before his reads the script. How else could you explain his laundry list of dreck? Gigli, Smokin’ Aces, Surviving Christmas, Phantoms, Reindeer Games, Man About Town, Daredevil…

Affleck’s only excuse is if he takes these ill gotten gains and pumps the money into creating films like Gone Baby, Gone and The Town – you know, decent, credible films!

Until we can clarify this I would ask Mr Affleck to title all of the films in which he lazily acts Paycheck in the interest of transparency. 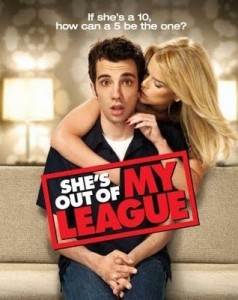 She’s out of my league

Look at the cover, I know the title is the point. With apologies to Mr Baruchel, I just can’t envision a pairing where it is more appropriate. 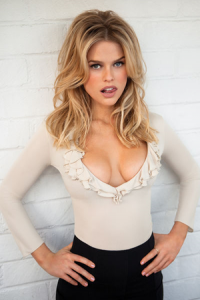 To be honest, I am only including this film for two reasons; 1/ because an 11 name list seems unfinished, and 2/ jealousy. I mean Jay Baruchel has money, fans, wit and charm in real life – he still isn’t getting Alice Eve.

Whoever does end up fortunate enough to land Alice Eve must realise that she has settled, cos in truth she is out of everyone’s league.

So that’s the list for now, until Rob Schneider, Ashton Kutcher, Molly Shannon and  Shia LeBeouf make a film named ‘Shit Sandwich’ about a faeces-filled snack with magical powers and I feel motivated to create another such list.