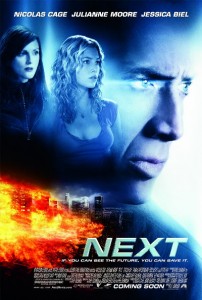 ‘Next’ is a homonym (word with two meanings), at least where this film is concerned.

Upon hearing the word the writer, director and probably Nicolas Cage want you to think of a man with the ability to see the near future. The more likely – and more lasting – second impression is what viewers will be saying about 15 minutes into the running time as they eject the DVD…

Cage plays Chris Johnson aka ‘Frank Cadillac’, a Las Vegas casino lounge magician who informs us in the opening scenes that some magic is in fact magic and not sleight of hand or trickery. Well I’m glad that’s sorted then.

Johnson has the unique ability to see how events are intended to play out with total clarity for a period of exactly 2 minutes. He supplements his lounge magician show with small calculated winnings made at the blackjack tables so as to remain under the radar of the casino police. This begs the question as to why he never thought to exploit his gift at the horse track, after all a once a month windfall on an outsider would be harder to come to the attention of authorities.

I also wondered just how valuable such a limited window of complete foresight might really be for most real people. For most  having 2 minute advance imagery might mean;

Chris Johnson though has a far more interesting life than us apparently, so he gets to see things like armed robberies, explosions, kidnappings, rockfalls and car accidents. Unfortunately none of those things make this film any more interesting…

When Agent Farris (Julianne Moore) approaches Johnson she immediately tells him that she knows his secret and is aware of his abilities. She then goes on to ask Johnson to help save millions of lives, as it turns out that the Russians have a big Boom-Boom that they want to use to kill millions of Americans in the near future.

‘No thanks’, sez big Chris, who would rather use his bizarre skillset to attempt multiple pick-up lines on his dream woman Liz Cooper (Jessica Biel), with who he has a total fixation even though she doesn’t know he exists – and looking at them both she really has no reason to. In another dumb twist Chris has total psychic visions only where Liz is
involved, meaning his two minute window is stretched out indefinitely.

Of course Chris and Liz end up together after a ridiculous turn of events which only get stupider (Liz feels comfortable walking around nearly naked post shower in front of a man who for all she knows is a serial killer), and the Russian mob decide that Chris must die even though (A) they shouldn’t know he exists and (B) in reality he would have no way of foiling their plot anyway unless they themselves involve him.

But involve him they must, elsewise this film would… well it would still suck.

I feel bad for Julianne Moore as she urgently rushes around pretending she gives a toss. I don’t feel as bad for Jessica Biel, who will remain hot for a while yet and will always be in demand for ‘pointless hot girl’ roles if this real acting thing doesn’t pan out (Helloooooo A-Team!). I would feel bad for Nicolas Cage, but after so many of these poorly chosen roles in the last decade I know he doesn’t care about his own career anyway, so why should I?

While I try to throw a joke or two into proceedings when I can all of the opinions presented in my reviews are genuine. I don't expect that all will agree with my thoughts at all times nor would it be any fun if you did, so don't be shy in telling me where you think I went wrong... and hopefully if you think I got it right for once. Don't be shy, half the fun is in the conversation after the movie.
View all posts by OGR →
This entry was posted in Crappy Movies, Film, Movie Reviews, Nic / Nicolas Cage. Bookmark the permalink.