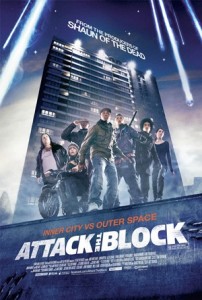 “Believe innit Fam. We this decade’s Goonies.” (It may make more sense once you’ve seen the film – though probably not…)

Look, I was as excited as you when Attack the Block was released in the UK and US, so when I couldn’t find a release date for Australia and I saw that it was already out on DVD overseas I jumped on ebay quick smart. A week and some dented packaging later and here we are…

I’m not here with express intent of submarining the film (and might I point out that 6.5 is hardly a terrible score), but a deliberately low budget horror film that aspires to be this decades Gremlins, Critters or Ghoulies, boasting a no name cast, derivative elements and effects that can’t be mentioned without reference to the film being low budget. And for the record, Critters or Ghoulies were hardly considered necessary and Gremlins deemed to cutesy for teens and too grown up for kids…

If Attack the Block was introduced to you via a dating service the blurb would lead with great personality.

Put still another way, this might look, smell and sound like Slither and Shaun of the Dead, but take it from me, Attack the Block is no Slither or Shaun of the Dead. I died a little inside putting them in the same sentence.

After an opening shot that caused me to lean to ask quite simply “really?” – after all, even if it really was a homage and not a lazy plot device – it is fair to say that this homage has already been homaged. Many times.

Anyway, when these ‘critters’ crash land in the wrong hood the local teens waste no time in killing it, then parading it around the area before deciding to cash in on their find. But as they ponder which media opportunities to turn down new arrivals fall from the sky.

The 5 young lads immediately decide to tool up and get into ’em. After all, one must defend this particular block where everyone talks just like Ali G.

Only this time the aliens in question are bigger and decidedly more trouble, they might look like a pitch black Sully from Monsters Inc – aside from the glowing razor sharp teeth they even seem quite cuddly – but these guys aren’t here to scare toddlers… 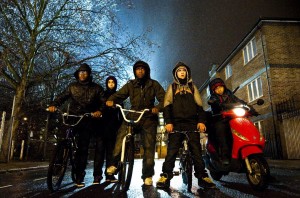 Even alien killers need to wrap up warm.

So the 5 lads move about the local area, always with a creature or two (or many more) in close pursuit. Also on their tail are the local constabulary and a fiendish drug dealer who feels that he has somehow been wronged, and in tow is Sam, an off-duty nurse who has found no alternative but to align herself with the young boys who only hours prior saw fit to mug her in the middle of the street.

The movie progresses as these films do, with the main wonderings being who will survive and how might they remove this evil scourge from their proximity. The performances are actually pretty good, with Moses the unofficial leader of the gang being a standout. Nick Frost does indeed have a cameo – furthering the SotD comparisons, but in truth his is a bit part that could’ve been played by a million others, or as the boys themselves might say ‘Ee’s hardly in it, innit!’

I can’t be seen to be attacking the small indie low budget Brit horror film that could, so I’ll leave you with this;

The film lacks any real humour, which in an absence of true scares and a scarcity of gore is a real drawback, leaving a film that is , , and pulse pounding (at times), that reminds us of Critters, Gremlins and Ghoulies.

Final Rating – 6.5 / 10. You can shill your twenty bucks if you like if and when it hits theatres, I’d suggest you rent the aforementioned and wait for AtB to itself be released to DVD, where it might be a more suitable complement to your popcorn and coke and a fraction of the cost. (My DVD cost me $14 including postage.)