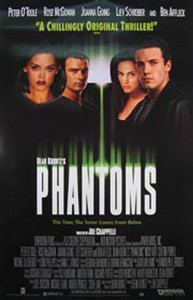 Maybe guys like John Carpenter and Dean Koontz should be a little more selective at what they put their name to.

Case in point is ‘Dean Koontz’s Phantoms’, a laborious exercise in flogging a lame premise to death with inept everything. Or, if you’re a glass is half full sorta guy, it might be labelled a master-class in amateurism.

Lisa (Rose MacGowan) and her sis Dr Jenny arrive in Snowfield to find everyone dead. The first bodies they find seem petrified in both ways – scared and rigid – then as they investigate further things get progressively worse. So does the film.

Lisa and Jenny find other survivors in the form of a trio of cops with Ben Affleck as the Sheriff and Liev Schreiber the creepy one. No-one can tell what is happening, but with glimpsed movement, lurking things and radios that turn on with no-one in the vicinity, it has all the makings of cookie cutter horror.

It isn’t, but you’ll wish it was. You can forget cookie cutter horror easily.

The FBI don’t know what is going on either. But they’re here. The army don’t know, but they too show in numbers. The guy who does seem to know is Dr Timothy Flyte (Peter O’Toole putting an unfortunate full stop to a career), a hack creator of sensationalist tabloid schlock covering Elvis sightings, Aliens among us and other stuff so silly Jerry Springer wouldn’t cover it.

The reality of the situation arrives suddenly and is even more swiftly disappointing. In related news did you know certain bugs can learn on the go and pass their knowledge onto other bugs? No? I sure didn’t. But out of the final four survivors of the initial stupidity, two did. That’s 50%. One starts out telling the others their obscure flatworm related tidbit of inane trivia, only to have the second person jump in to complete the factoid. Neither had met until minutes previously.

But from my experience of ‘Smalltown USA’ I have been lead to believe by movies and TV that you could absorb the entire town’s collective learnings and know perhaps seven things – and four of them would be Kardashian related. Another might be skinning a squirrel…

In Phantoms though they have some pretty savvy bugs, with apparently one huge master runnin’ thangs from the background, while various minions cruise around the town on fact gathering missions, and no doubt to get into the fruitbowl if they can.

In this way it’s just like Slither, except that awesome film did this way better thanks in large part it knew the premise was so silly and embraced it. Phantoms has no such self awareness. Consider when they bust out the ‘ancient bug to human voice’ translator and no-one laughs or raises an eyebrow. Sure this ridiculous technology could save millions of our six legged friends if we could only reverse the polarity and warn them about the evil that is Mortein.

Phantoms sure is some preposterous shit yo. (Shout out to the two Jay and Silent Bob fans.)

Final Rating – 4 / 10.  Once you find out what is behind the initial tension and suspense you start wondering why bugs decide to wander around turning radios off and on. Once the credits roll you’ll start wondering why you didn’t consult a learning bug and turn the TV off.