The Girl with the Dragon Tattoo (US Version) – A Protest Review 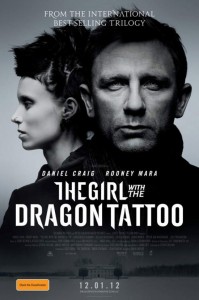 Besides the fact that I found The Social Network entirely over-hyped and mediocre I have nothing against David Fincher. I love Se7en, thought Alien 3 was way better than everyone else claims and found many of his other films at the very least interesting.

All that said I never really had an opinion on the news that he was to remake The Girl with the Dragon Tattoo (original review) until just last night when I saw it.

Now I am quite retrospectively opinionated.

First let me say that I am not above remaking films (in a few weeks though I plan to put forth my views on when and where it is OK), and there are a couple of valid reasons to remake the Swedish original:

1/ Being Swedish it was subtitled

2/ It was a good movie, but by no means great

Regardless of my yay or nay the movie was remade and is now here. So what’s new?

The plot follows journalist Mikael Blomqvist in the wake of some extremely negative publicity as to his methods and integrity, and those of his underground but respected magazine Millennium.

Mikael takes a leave of absence to avoid the media spotlight for a while, hiring out his investigative powers to delve into a 4 decade old young woman’s disappearance. This brings him into the orbit of the Vangers, a fractured family who it seems all have a secret or reason to detest the others, not the least of which being the presence of a few former Nazi sympathisers.

Things heat up when Mikael seeks the assistance of Lisbeth Salander, a young alterna-genius with a brilliant mind and deliberately underdeveloped social skills. The middle aged Mikael and young girl with the troubled past of her own make a strange but powerful team, and in my view Lisbeth Salander is one of the better realised characters in film over the past few decades.

In my opinion Fincher has made the exact same film for the most part with no substantial changes or tweaks. The changes he has made sugarcoat, simplify and spell out the plot a little more clearly, but aren’t additions of any merit. Take the introduction of Mikael’s daughter who pops in for a visit just long enough to remind her old man that she has discovered religion, which in turn helps her provide a breakthrough in the case that had Mikael stumped – and as she stepped onto the train to leave to make it more dramatic.

So no substantial changes of note then. What about the actors?

Well Daniel Craig plays Mikael, I have no philosophical problem with sexifying the lead character up a little. I do have an issue with his accent, which starts reasonably strong and then totally vanishes by the half way point of the film.

And what of Lisbeth? To use American Idol vernacular Noomi Rapace owned the role in the Swedish originals (Dog), but she went public and said that after spending so long in Lisbeth’s piercings and hoodie she couldn’t fathom reprising the role for the remakes.

Which brings us to Rooney Mara who I must admit does a pretty good job. Again though I found unnecessary tweaks to the character. In the Swedish film Lisbeth is essentially a socially awkward savant genius, with photographic memory, incredible powers of perception and logic and a steely dispassionate sense of emotion. Essentially a lesbian, Lisbeth is bisexual only when using sex is to her advantage.

Mara’s Lisbeth more a replica of the original rather than a new creation, again she is sexed up, and again she draws attention to her skills – and therefore herself – in ways that the Swedish Lisbeth would never do. Examples? She is open with her ‘insanity’ rather than not discussing it, she scoffs when Mikael suggests she takes a second look at some papers (a la ‘I have a photographic memory you know!’) and she is far more sexual in this US version.

All of the above factors reek of audience pandering, making the subtle more unnecessarily obvious and bringing some sexual charge into proceedings where the original film was more perfunctory.

And as for the opening credits and scratching, scraping and droning soundtrack we get it Mssrs Fincher and Reznor! You’re industrial and alternative to the core. That doesn’t change the fact that your central character Lisbeth Salander is not eyecatching, slick or demanding of attention. What it does tell me is that you desperately want some cool points for your film. I loved the credits, a lot more if they were a million miles removed from the film that follows.

To sum up. David Fincher took the – admittedly not Great – Swedish original, kept the setting, plot events and storyline for the most part intact. While Fincher it seems tried to clean up certain storyline elements, for some reason he didn’t bother with the confusing and disorganised second half of the film, which was one issue that hurt the original too. Then he sexed up the leads and used an unnecessary end sequence to change Salander’s character further, and introduced new unnecessary elements and enhancements (crappy music and slick credits) that don’t fit the tone of the film.

And he made it in English. In essence the only change that I can understand. Other than the fact that this film ain’t fer readin’, it’s fer watchin’ I can think of a grand total of ZERO reasons as to why you might look it up in favour of the original.

There’s a reason Prince never covered Michael Jackson’s songs and vice versa, if you’re going to remake something good you better reinvent it, rework it or at the very least bring your A game. Unless you count a prettier cast, gunning for cool points or annoying those of us who loves the Lisbeth Salander character the way she was, Fincher does none of these things.

Congratulations David Fincher for making a bigger budget Hollywood pseudo-dub that is no better than the original and in many ways worse. It will make squillions. The Blu-Ray of this film will end in the collections of further squillions. The superior Swedish version will not.

Final Rating – 5 / 10. Before I mentioned Prince and Michael Jackson, while the Swedish original is the equivalent of neither the David Fincher hack job might be akin to a bar band covering the Red hot Chilli Peppers. The only thing this achieved was making me like the Swedish films more.