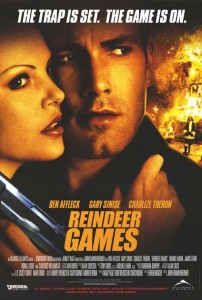 And in between Charlize Theron gets her top off. Twice.

The film revolves around deliberate mistaken identity and a continual lack of common sense. Consider a scene where the supposed ‘hero’ finally escapes his captors and inexplicably runs hundreds of metres to maintain the ruse that he is fact still in custody – rather than running those same hundreds of metres into the night and freedom…

Rudy Duncan (Ben Affleck) is released from prison after a stretch for stealing cars. Just prior to his release Rudy narrowly avoids an untimely shiv to the guts meant for him. Unfortunately his best mate Nick cops it. So upon release the following day Rudy returns the favour by posing as Nick to get close to the prison pen pal that had written his dead cellmate so often.

And cut grass has never looked so good.

Of course Rudy – now ‘Nick’ – and Ashley (Charlize Theron) get along like a house on fire. If this is an even vaguely realistic look at the results of what a prisoner might look forward to give me a weapon and a pen. They start planning their lives together, which apparently means a lot of time confined in a hotel room…

Only it can’t last. Ashley doesn’t even get the chance to realise that she is too good for this convict before Gabriel (Gary Sinise) and his small crew of rough and tough hombres appear. Gabriel informs Nick that he is Ashley’s brother, and he is none too pleased with the thought of what Nick and lil Sis were up to in the hotel room. Also Gabriel wants Nick to help hold up a casino where the real Nick once worked.

And this is where things get stupid. And believe me they stay stupid for a long while.

Rudy realises that this ‘Nick’ thing is over once the weapons come out. After all any ‘insider knowledge’ died in prison when the shiv entered. But despite his lengthy, continual and detailed protestations Gabriel and his morons still maintain that this is the real ‘Nick’. Gee lucky Nick didn’t send Ashley a photo, or describe himself much, or have a facebook page… And lucky Gabriel and co did zero research in preparation for this major crime.

And in any case, how much help can a former security guard that hasn’t seen the place in two years actually be? You think they didn’t change the codes or systems in two years? Especially once they heard a former staff member was in prison…

Anyway once Rudy has a gun pointed at his face for the umpteenth time he says ‘Fuck it I’m Nick. I musta plumb forgot until just now’, and the crew settle down to plan the job… Based upon a texta drawing of the casino on a piece of A4 paper.

So for at least an hour the three sides, Nick, Ashley and the crims, all maintain their various ruses. It seems everyone but Nick has secrets – at least aside from the one where he is actually not Nick the former security guard with an insight into the casino they plan to rob, and a petty car thief instead. I mean aside from that one… Ashley especially has a role that makes no fucking sense, she changes sides more frequently than a Rubik’s cube and seems perpetually confused as to which side she is currently supposed to be loyal to.

It doesn’t really matter much in any case. In fact thinking about it gives the film too much respect. Reindeer Games is the dumbest film I have seen in a long while, and I’ve seen some Will Ferrell movies.

By means of final evidence; the result of the lengthy planning process is a bunch of guys in Santa suits run in with shotguns and machine guns and lay waste to the casino. That was worth it.

This film certainly is not.

Final Rating – 4 / 10. I can’t believe a film which grants us a long look at Charlize’s charlies can’t prompt even a cautious recommendation. But there you go.