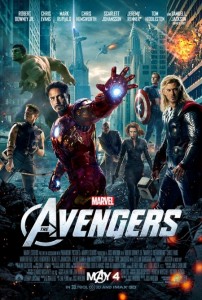 The only thing ‘low key’ about the villain in Marvel’s The Avengers is the phonetic pronunciation of his name – Loki.

As a self-titled demi-god Loki considers himself above all mankind feels that the only appropriate place for us is kneeling at his feet. Despite being deathly wan, sickly looking and lank haired Loki struts like a peacock dressed in garish threads and carrying a sceptre/spear combo that would be the envy of many a pretentious git.

Is he the grandest villain in the Marvel universe? No, not really. But he’s the one we’ve got, and with the kick arse last 30 minutes in this uber-comic movie it’s enough.

The usual plot has Loki showing up through a door opened by a cube of purest energy, it’s called the Testarossa or something, and might be the key to solving the globe’s present and future energy issues. In five minutes flat Loki snaffles the cube from the crack security agency known as S.H.I.E.L.D. along with a few formerly good guys, to start his own gang, leaving after informing Nick Fury (Samuel L Jackson) of his plan to use the cube to allow a race of space monsters access to Earth to wreak havoc.

Fury promptly decides that’s it, and cues the ‘We’re putting the band back together’ montage. So there’s your next 40 odd minutes, meeting guys we knew from their own movies (Iron Man, Hulk, Thor, Captain America) or gals that weren’t even cool enough to have their own movies (Black Widow). I would venture that this was an unnecessary digression but apparently if your movie doesn’t clock in at a bladder bursting 2 ½ hours then it obviously can’t be ‘epic’. 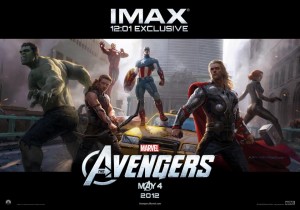 Now with the pic above as a reference (L-R) I will now try to avoid doing the same by limiting my description of each member of the Avengers to three words:

* Satisfies the contractual obligation that states Jeremy Renner must appear in any franchise made since 2010. See also Mission Impossible, The 2012 Bourne film. Renner will probably be in Paranormal Activity 4, He is first emergency to be the President should Barack Obama sprain an ankle in a pick up game, and in a pinch can run the fourth leg for the 100 m relay should Usain Bolt have the flu…

Director and write Joss Whedon has an ear for snappy dialogue, he loves setting up jokes and then leaving the audience hanging for a minute or two before delivering the punchline. For example, someone might point out that a particularly amateurish and hacky writer always seems to use the descriptor ‘little black duck’, as long as sometime in the near future that phrase pops up you’re golden. In doing this it doesn’t even matter if the punchline is obvious or unfunny, the audience will chuckle anyway to acknowledge that ‘yep, there it is. I got it’.

In saying this the dialogue is quite amusing, and the interplay between Tony Stark (Robert Downey Jr) and Bruce Banner (Mark Ruffalo) is especially witty.

The film is also visually inventive, an airborne gargantuan aircraft carrier looks amazing, and squeezing Scar-Jo into a tight black suit is always a good idea. Iron Man has also never looked better, and when he, Thor, Loki and Captain America have a tiff in a forest that leaves the trees as so many toothpicks, it whets the tastebuds and suggests that when the real stuff comes it will pack a punch.

And it does. I don’t think it’s at all spoilerish to suggest that the naughty space robots gain passage to Earth – 6 guys taking on Loki for two hours would get old fast – and once they drop in there isn’t much else to do but indulge in pure action bliss as the Avengers finally get down to avenging… something.

In this sequence Iron Man, Thor (Chris Hemsworth) and the Hulk do all the heavy lifting, they are the biggest guys after all – but the big green guy steals the best moments, that little black duck sure does pack a wallop – while Hawkeye (Jeremy Renner), Black Widow (Scar-Jo) and Captain America (Chris Evans) ward off assailants and guard a stretch of street for no real reason aside from it looks cool.

It reminded me a lot of the last hour of Return of the Jedi, where all the various subplots were being simultaneously reeled in and wound up, and all the lead characters took on their various key moments and nemesises – nemeses? – with the supporting cast waging generic war in the background as we cut between them all.

And by the way there’s nothing at all wrong with cool. Cool will always be cool.

The Avengers stays very much in the PG lane, it is noisy and explodey and sexy and sassy, but never too much of any of those. No-one swears, no-one ever seems to be in any real pain or peril and alas too much of Scar-Jo is allowed to remain in the costume at all times.

The only downside to the film, aside from the overlong ‘meet your Avengers’ sequence (rent the DVDs people!) is when someone actually manages to buck the odds and dies…

Don’t get excited, I won’t say who aside from they sure as hell ain’t on the poster. You won’t know who anyway even if you do know. I watched the film last night and can’t say I recall the guy’s name. But apparently the war time death of one guy that even most of the Avengers met only hours before is so moving that it prompts bickering, snappiness and depression among the team. It was the most boring and unnecessary 20 minutes of the film and I wish it wasn’t there.

But that’s nitpicking. In reality the first 90 minutes of The Avengers is window-dressing anyway, well costumed foreplay preceding the main event. Aside from some snappy dialogue there was only one ‘mega’ scene in it.

But I could quite happily state for the record that the last half hour of The Avengers is some of the most fun I’ve had at the cinema for a long while. It almost justified the perforated bladder and missing a mortgage payment for the ticket and some stale chips… (Note to cinemas; more people would go to the movies if you stopped trying to make next year’s profit today.)

Final Rating – 8 / 10. While not the greatest film in the Marvel universe – that would still be Blade 2 and Iron Man in that order – The Avengers took the unenviable task of cramming an entire comic-con worth of costumed characters in one film and making it fun for even non comic book fans, with the crescendo of the film being nothing less than a nerdgasm.