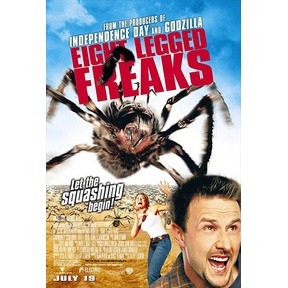 Now just where did I leave that 100ft rolled up newspaper?

Despite the fact that David Arquette is the quote-unquote ‘star’ of this – or any – film and that his name appears before the main title, 8 Legged Freaks is a fairly entertaining albeit instantly forgettable giant creep-crawly romp.

In the small town of Perfection *AHEM Tremors fans* Prosperity, Arizona, a toxic spill in the local water near a spider farm (!) has resulted in a new batch of 8 legged uh-ohs. This means Chris (Arquette) has picked a bad time to come home for the first time in over a decade, even if is for the noble intent of stopping Big Business from trying to buy out the town for some initially unknown (but assuredly fiendish and underhanded) reasons.

This leads to Chris, a young Scarlett Johansson, B movie queen Kari Wuhrer and some bug-loving kid to join forces against an incredible array of over-sized arachnids – 95% of them the CGI variety – who after they announce themselves to the sleepy town jump, crawl, scuttle and leap after, on and over the local population.

It’s silly, inane, implausible and full of crappy effects and even worse acting, and the sound effects have to be heard to be (incredulously) believed. Just about everything that you could ask for in your B Movie creature feature really.

The only major drawback to Eight Legged Freaks is the dodgy CGI, this could have been Piranha 3-ish with today’s computers and a few better jokes. That aside if you’re after a decently atrocious $1 weekly rental you could do a lot worse, if only to see that even at a young age Scar-Jo already had a fair amount of what has made her so famous today. (I looked, she was 18 here, so it’s merely creepy, not borderline illegal.)

Final Rating – 6.5 / 10. David Arquette’s best film is a silly el-cheapo bug flick? That sounds about right to me.

P.S. This is one of those rare horror flicks that I would admit to being ‘good crappy’.