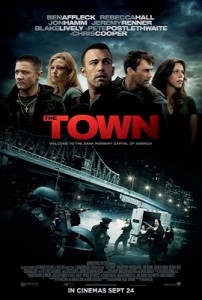 “Can’t anyone see where the camera is?”

Ben Affleck seems like a big goofy guy in the Keanu Reeves mould – bit of a doofus but a good looking bloke with a bit of charm who could remember a few lines and stand on an X with a camera pointed at him.

That’s not a huge negative, half of Hollywood’s elite could be described similarly.

I thought the Family Guy joke which showed Affleck and Matt Damon finishing the Good Will Hunting screenplay – when Damon is putting in the work and all Affleck talks about is weed – hilarious.

Then he announced he was directing and eyes rolled across the land. Mine did anyway.

Then I saw Gone, Baby Gone and was forced to admit that I might have been way off. But then stubbornness kicked in; it was a fluke, a one off, a lucky lightning strike.

And here is the 3 word review for his new effort The Town: It’s very good.

Now before I continue The Town isn’t near Gone Baby Gone, the story is more straightforward and a little derivative at times. But Mr Affleck (to you) has proven he is no one trick pony. If anything he has proven to me that his future seems rosier behind the lens than in front of it.

There is a rough area in Boston (pronounced Borrrstun apparently) called Charlestown and as the movie semi-brags it is home to more bank robbers per head of population than any other area. Kids are literally raised into crime as the family business.

The Town looks on one such crew, though to be fair it really focuses on two guys.

Doug (Affleck) is a master planner. He considers the risk vs the reward, the timing and plans for every possibility before the heist commences…

His father is in prison for life (you’ll never guess why), and his Mother apparently ran out on the family when he was a boy.

Doug knows that violent criminals are more mercilessly hunted by the police so each job has more intimidation and threat than brutality. He also quickly deals with any tracers or dye packs that could prevent or impede a quick getaway.

In / out with minimal fuss. Crime is merely Doug’s job.

Jim (Jeremy Renner) on the other hand loves the life, perhaps a little too much. He is a loose cannon. A hothead.

When asked to take a ride to beat up a guy whom he has never met, for reasons he can never know Jim has but one question: “Whose car should we take?”

Jim is a dangerous man, even among criminals.

The first scenes show the latest job for Doug, Jim and the other two members of the group – to be clear everyone bar the afore-named are merely peripheral characters – the bank job goes well, almost without a hitch until someone triggers the alarm.

In light of this unexpected development Jim decides to take a female bank staff member hostage until the coast is clear, and they release shortly after the getaway is complete – taking her ID as a parting threat to remind her that if she helps the police they know where she lives… The problem is that the staff member got a fair gander at some potentially identifying characteristics on one of the gang.

Job complete the boys lie low for a while until the to-do dies down a little, reporting only of their success to sinister and menacing Boss of ops Fergie (Pete Postlethwaite, looking seedier than ever).

But Doug being very much a guy that dots the i’s and crosses the t’s decides to follow up on this bankie to see if she might prove a problem, knowing full well that the investigators on the case will grill her for everything she knows (John Hamm plays the lead FBI man on the case Agent Frawley). A twist of fate leaves Claire and Doug face to face in a laundromat, rather than avoid any interaction Doug strikes up a conversation and the two chat, setting up a date.

The next day while Doug struggles with the conundrum of whether it is really a good idea to be taking the person most likely to send him to prison out; Jim openly wonders if they should “take her Out”… so Doug decides it might not be the best idea to inform Jim of recent dating developments in his life.

The remainder of the film deals with the burgeoning relationship between Doug and Claire and the impact that it might have on both their lives. Doug decides that maybe performing major crimes might not be in his and Claire’s best interests – but evidently it is not an easy life to get out of. Jim and Fergie are around to make damn sure of that.

The Town had a couple of solid action sequences during the multiple heists which almost covered up some of the logic and plot holes. Hamm’s Agent Frawley always seemed only a step behind the crew at all times but I’m not so sure the real FBI would be ecstatic with the investigation in this film – there seemed to be more than a couple of opportunities to nab someone that were either ignored or overlooked.

The gimmick of the criminal hooking up with an innocent is not new, most recently coming up in another (inferior) film called The Ministers. It is mostly handled well but again there with even the most casual queries Doug’s alibi would have evaporated swiftly.

The Town has a little more flash than Affleck’s previous effort but still toes the rigt side of credibility and reality – if he had closed over some of those plot holes Affleck might have had another minor classic on his hands, as it stands he will have to settle for a very good and entertaining second effort.

Oh and as far as everyone lauding Jeremy Renner as Jim – perhaps feeling guilty that they missed the chance with The Hurt Locker – he is OK but not mind blowing or even especially menacing. It seems that if a non-Bostonian has a crack at the accent and semi pulls it off that they are immediately awesome. See Nicholson; Jack.

Final Rating – 7.5 / 10. An entertaining couple of hours. One of many good films to be released lately.