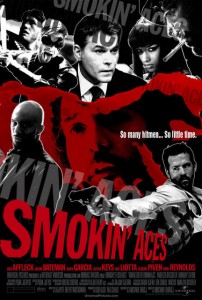 The only common ground I can find in this blandness is that Jeremy Piven is a valid target for assassination.

Here he plays Buddy ‘Aces’ Israel, a Vegas showman who has over-stepped his bounds by venturing into petty crime. In doing so Buddy hasn’t shown himself as merely out of his depth, but a definitive threat to real Vegas organised criminals, the very same group who have tacked a One Million dollar price tag on Buddy’s wigged bonce…

The central premise of Smokin’ Aces is that a mismatched grab bag of the colourful and opportunistic hitmen and women from all over descend upon the hotel in which Buddy is being detained in witness protection.

I myself won’t bother describing these individuals, who like awkward teens are all quite similar even after their desperate attempts to come across as unique snowflakes. They all have quirky names and eccentric traits, and gender and race aside they are all much the same.

On the other side are the hapless FBI charged with the unenviable task of keeping Buddy alive despite all evidence that suggests the world would be a far better place without him. (I felt bad for Ray Liotta here. Appearing alongside Ryan Reynolds as best buddy partners who want to save Jeremy Piven from death must have called for more actual ‘acting’ than he must be used to.)

While the first half of the film is spent setting them up, the second half is reserved solely for knocking them all down. It takes a while for the bullets to start but once they do they rarely pause to reload. Unfortunately none of this can elevate the pulse nor the enjoyment factor for anyone who desires a little more than a stream of uncreative profanity and interchangeable cadavers.

Final Rating – 5.5 / 10.  A Reservoir Dogs via Lock Stock and Two Smoking Barrels rip-off that is not in the same league as either. This is the cinematic equivalent of a clumsy graffiti tagger who believes himself an artist…