The Book Of Eli (Review) 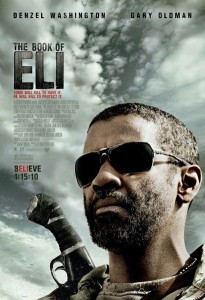 With the writer’s strike and the Global Financial Crisis occurring within 2 years of each other the word was that Hollywood would only make the big guaranteed crowd pleasers, no more taking a punt on the little picture of the fresh new visionary director.

This has lead to dozens of comic book adaptations, and a million more unnecessary sequels simply because the bean counters know there is a market for it.

Example? Name a “4” movie from the 80s or even 90s that didn’t have Kickboxer or Friday the 13th ahead of it. A bit hard, I couldn’t think of a mainstream one aside from Lethal Weapon 4.

In the next year or so: Shrek 4, Spidey 4, Pirates of the Carribean 4, Harry Potter is up to 7 or 8, another Bond is coming…

And that’s before we get to reboots, remakes and comic book franchises: GI Joe, Sherlock Holmes, Wolfman, Alice in Wonderland, Toy Story 3, Iron Man 2, Prince of Persia, Tron, The A Team…

Now after digesting the above information you could be forgiven for thinking that the film industry has no interest in making anything other than sure fire winners, and until a few weeks ago I would have blindly agreed.

But in the last three weeks I have watched 3 different mainstream released, yet bona fide B movies made in much the same manner as they would have been in the 80s or 90s. The main difference in the present day is the name brand actors that are attached to the flicks.

Rest assured that The Book of Eli is a B movie all the way, and actually could have been very nearly as good in my opinion without Denzel or Oldman, but it would never had gotten a mainstream release or made as much moolah.

Nor would it have been reviewed as favourably regardless of how well the replacements did, as “runs on the board” lend immediate credibility that a struggling actor doesn’t automatically get. (It’s like the superstar rule in sport, certain big name guys get all the calls because of who they are and what they have achieved, actually making it easier for them to continue at that level. Yes I’m talking to you Kobe.)

So The Book of Eli…

Denzel is a loner in a post-apocalyptic wasteland, scavenging through the ruins and surviving against the odds through sheer force of will while civilization crumbles around him.

In the early scenes we see the lengths that Denzel must go to, to simply survive, nothing is too scungy to eat or too worn out to wear or use.

Early on he kills a cat and much like the Native American Indians nothing goes to waste, he even feeds some of the carcass to a mouse in a reverse animal pecking order situation, or maybe he is just a dog person. Strangely enough shortly after in the same run down building he finds a human carcass, largely untouched. I guess the mouse must have had a discerning palate.

(I actually like what the filmmakers didn’t do here as much as what they did. There is no cheesy Terminator style voiceover saying things like “In the years following the apocalypse it was more than simply existing, it was survival”, and similarly melodramatic crap, nor did they rely on synth heavy doomsday music, it is simply a guy going about what he does on the day to day.)

Denzel’s (he doesn’t have a name yet), only luxury is an ipod that he carries around so that it might act as his personal soundtrack. Now it is apparently 31 years after the great battle so Apple must have finally fixed those recharge problems that plagued early versions, or there are ipod docks strategically placed around the barren landscape for mercenaries and loners to use?

Denzel proves that he ain’t just a handsome face that makes ladies (and some guys) of all ages, backgrounds and race go “Mmmm-hmmmm! by coolly butchering about half a dozen hijackers in classic B movie style. (“I told him twice not to touch me, so I cut off his arm”)

At this point I might mention that the fight scenes are actually really good in this, the action is suitably violent and you can actually see what is happening, as they chose to film the melees from far enough away and didn’t settle for lazy quick edits. The first half of the film in particular has a couple of worthwhile fights that I fully intend to rewatch on DVD.

So after all that Denzel finds a small town that is lawless and post-apocalyptic enough to suit his needs and further his story, so he enters. After Denzel barters with shopkeepers using “relics from the past” (read: present day stuff) he heads to the bar for a cool refreshing drink… of water, pure water being a particularly scarce, and therefore valuable commodity.

Of course not all goes smoothly and after another fight scene reminiscent of early Jackie Chan films, (and stab. And turn. And you punch. And I duck. And chop. And turn. etc… Thanks for lining up and waiting guys!) he gets to meet the town crime boss Carnegie, played by Gary Oldman, who seems to be channeling Jack Palance in City Slickers for his performance.

Having witnessed the butchering of his minions firsthand, Carnegie appreciates Denzel’s skillset and says he has a job for him, to which Denzel says thanks but no. Carnegie insists he think it over and comps him a room for the night, so that he might offer various bribes of food, water and women, specifically a young girl named Solara, played by Mila Kunis (another B movie throwback as while she is likeable I just don’t think she can act) the daughter of Carnegie’s personal wench.

Carnegie exerts his influence over Solara through bullying her Mum, and decides a little luvin might be just what Denzel needs, or at least will let Solara uncover information about what Denzel is up to.

So we finally get to the essence of the story: Denzel has special book which he is taking to an unspecified “East”, Carnegie wants the special book.

(What the book contains is largely irrelevant and adds nothing of value to the story, it does seem to be a talking point for some though, I can’t see why myself.)

So when two opposing forces don’t agree and won’t veer a collision is inevitable, and the final third of the film degenerates into a well worn path replete with a million clichés, each more well worn and cliché-ey than the last.

Especially when Solara wants to tag along for no plausible reason aside from getting herself in danger so that Denzel might save her. It’s very much like a father having a conversation with his young child who wants to tag along somewhere that they aren’t ready for:

“I bloody told your Mother this would happen!”

Despite this I quite liked The Book of Eli all the way to end, where instead of the hero walking off into the matte painting background distance as with most 80s B movies they decided to flip the script and tack on an inane and stupid twist that made no sense. (Didn’t ruin the movie for me though, just knocked some IQ points off it.)

The Book of Eli takes a straightforward story and some familiar characters and does the best it can with them, it has some inventive fight scenes, doesn’t outstay its welcome and thankfully doesn’t go too heavy on the CGI.

Final Rating – 7 / 10. I don’t mind if you rip Mad Max if you do it well, and I think that this is the best that they could do given what they had.