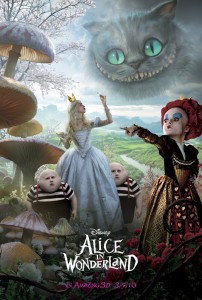 “Off with their computer generated heads!”

As a young child of around seven years of age Alice has nightmares of some real freaky shit. She tells her Dad, who is cool enough to say that “Only special people see special things”, or something to that effect.

This is good at the time but loses impact as he dies in between that time and Alice turning about 20.

Alice is still a daydreamer and abstract thinker, but Mum just doesn’t understand why she can’t be normal like the other young girls who want to be proper and marry off to well-to-do boys who will provide for them as long as they behave, and she expresses as much on the way to a formal gathering.

Alice herself is apparently destined to be with well-to-do Hamish, a bit of a pompous and smarmy git who very much assumes that they will be together once the proper arrangements have been made. One of these arrangements happens to be party they are attending, which is actually meant to be Alice and Hamish’s engagement party.

Once Alice herself is informed of this little change to the running schedule she bails to compose her thoughts, explaining to others that she has spotted a rabbit wearing a waistcoat.

Anyway we know what happens next don’t we? Alice falls into a deep hole. Upon finding a bottle marked “Drink me” she drinks, seeing something marked “Eat me”, she eats… Alas there is no “Blow me” sticker so we can’t see just how Paris Hilton she really is.

Outside the small room everything is indeed “Curioser and curioser”. Everything talks, and they live in an environment that must have been such a wet dream for Tim Burton to put together that I guarantee he is kicking himself for not thinking about making this film sooner.

There is much discussion among the “various talking things” if she is the “Right Alice”, some think she is the others are unsure, so they take her to the caterpillar Absolon, voiced by Alan Rickman in a perfectly apathetic and uppity drawl.  Absolon tells her she is actually the “Wrong Alice”.

Now understandably Alice thinks this is all a dream and she keeps waiting to wake up, at times throwing caution to the breeze, you can’t get hurt in a dream right?

It turns out that her destiny is to kill the Jabberwocky, the pet (think Rancor) of the Red Queen, on Frabcious Day, which is rapidly approaching, which will restore the White Queen to her rightful place on the throne.

In this acid trip of a plot I will leave it there, Alice comes across a big grinned cat, a big headed Red Queen, another big mouthed White Queen (although I think Anne Hathaway’s mouth is just big, not a special effect!) and Johnny Depp of course is the Mad Hatter, due to contractual arrangements that state he must be in every Tim Burton film.

I love Sleepy Hollow for some reason that I can’t explain. I like most of the other stuff Tim Burton does, and I like this. The visuals are of course sumptuous and vivid, the action suitably crazy and amusing and the plot actually meshes together reasonably well.

There is no one scene that stands out though as incredibly great, nor one performance or character that especially grabbed me, aside from Alan Rickman (who I think is a God thanks to Die Hard).

So I’ll just say this: If you like Tim Burton you’ll very much like this. I think for everyone else with an imagination or a willingness to embrace the abstract and different, this is worth seeing.

But I can’t give a heartier recommendation than “worth seeing”. At least it was better than Charlie and the Chocolate Factory.

One last thing, Computer Generated Imagery has meant that many films though impossible only a decade ago are now relatively simply to create. I only hope that it isn’t making many directors lazy, though the evidence is pointing to the fact that the easy way out is now to “tell a computer to do it”, rather than come up with an ingenious and clever way to do something.

Georges Lucas and Romero, I’m talking to you… and I’m watching you Burton!

Final Rating – 7 / 10. A satisfying retelling of a classic story, just don’t expect to be blown away.