The Prince of Persia – The Sands of Time (Review) 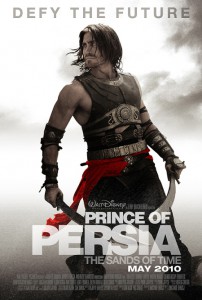 “Yeah take it all in ladies… and Ryan Seacrest.”

About once every three months I take a deep breath and go to imdb and rottentomatoes, heading straight to their “upcoming films” tabs. Once there I look to the see what the next couple months might hold, then I divvy up the films that I think might be OK into 3 categories;

That’s pretty much it.

As an example here is the very list I put together a couple months ago, there were more but I watched ’em and scrubbed them off:

If the films don’t make any of those categories then something dramatic needs to happen to change my mind, either massively glowing reviews, a direct recommendation from a mate or the old “nothing better to do”, though that usually happens after the film has been on DVD for a long while already.

Since this website started though I have bent the rules a little at times just to have something vaguely new to review from time to time. In a former life me watching The A Team in the first week of release would never happen, which brings me to The Prince of Persia…

A year or so ago another video game adaptation starring a pretty boy and with the watered down guarantee that only Disney can bring wouldn’t get the blood pumping and the hand reaching for the wallet. But last week a mate said he had 2 for 1 tix and would I go so I shrugged and said why not? And it is actually pretty good!

Does this mean I will start taking more chances with mainstream movies? Probably not, I think my pre-vetting technique works pretty well, it also means that I have generally decided if I want to see a film or not before the critics have got their claws into it and tried to mould my opinion. We all need to constantly remind ourselves that most critics have been doing this for many years, which only means that they are old and perhaps no longer in touch enough with what younger people actually like. Remember too, a lot of modern classics were bagged by critics when released only to see them come around when public support became overwhelming. You watch, in 2 years Kick-Ass will be called a genre classic, and all memory of the potty mouthed Hit Girl will be forgotten, (I’m going to keep saying this until I am proven right!)

oung Dastan, an orphan rascal is taken in by the king of the land and adopted at the start of the film, despite the fact that the dude already has two functioning sons already in Seso and Garsiv. Why does he take a shine to the kid? Because the kid stuck up for one of his similarly hard done by mates, that’s why.

That kid grew up to be Jake Gyllenhall, which is lucky as he is the star of this film where he is called Dastan. Dastan and his two brothers, now adults are on a bit of a “flex our muscles” mission with the King’s brother Nizam in tow in an advisory capacity. Upon intelligence received that the city they are outside has weapons they devise a plan: attack the city and take it over.

I said they were princes, not master strategists.

Dastan thinks that by flanking the city and taking the army by surprise they can minimise casualties on both sides. His brothers don’t agree. He does it anyway. Success.

Near the end of the battle Dastan picks up a strange dagger and tucks it away, you better believe this is an important coincidence.

s a prize of victory the eldest brother takes the cities’ Princess Tamina for himself (fair enough too, it’s hard toppling peaceful neutral cities), once they arrive home to inform the King of their success he turns out to be a fair bloke and regifts the Princess to Dastan, thinking the eldest brother already has enough wives.

Unfortunately a present provided to Dastan for him to give to the King at a celebratory feast turns out to be poisoned, killing him instantly. All present instantly blame Dastan and want him dead. He scarpers, taking the Princess along with him.

This is where things get interesting, Princess Tamina has had her eye firmly fixed on the dagger since Dastan showed, normally chicks looking hard at Jake’s beltline is commonplace, but not at a stabbing weapon. Dastan discovers that the dagger is magical, and at the press of a button rewinds time by a few moments enabling the carrier to alter events. The drawback is that the dagger is fuelled by special sands in the hilt, and supplies are low.

Dastan is unsure who killed his Father and is determined to get to the bottom of the issue and clear his name. After considering his options he decides he has no alternative but to go back to the city and sort this all out. Along the way he makes enemies with an ostrich wrangler (Alfred Molina) and his knife throwing henchman.

ack in the city Dastan discovers who was really behind his Father’s murder and why. He also learns that the dagger is actually a key element in the fiendish plot, this is further complicated when the Princess poaches the dagger and does a bolt.

The next hour or so sees Dastan and the Princess playing hot potato with the magical weapon, pursued at times by otherworldly assassins recruited by the bad guy, the “ostrich racing gang”, and his brothers.

Dastan eventually comes to realise that in order to make things right he must save the future from happening to itself.

Enemies turn to allies and vice versa along the way, Dastan and the Princess share a series of longing glances and lingering touches and everything finishes with some pretty PG 13 action.

Before I continue in this vein, making the film sound ordinary and clichéd I must point out that all the PG action is done in quite an entertaining way, nothing is too raqcy or violent but the action moves along at a nice pace and Jake gets to show off the results of 3 months of personal training and watching his diet carefully.

In homage to the video game series Dastan gets to scale walls that LeBron James couldn’t get up, can jump gaps and crevasses Carl Lewis wouldn’t attempt even with Ben Johnson’s steroids, and can kill dozens of assailants without spilling a drop of their blood, let alone his own. (Take that Kevorkian!)

The plot revolves around identifying the bad guy and defeating him, with the side issues being the romantic parts and transforming doubters to allies. It is after all a Disney movie, there can only be one main bad guy and his minions, everyone else is a good guy or a confused guy; one who will eventually realise they were wrong and become a good guy.

I think the filmmakers at least put some effort into this video game adaptation, the settings are vast and look expensive, some of the set pieces are very entertaining and filled with energetic movement and there are a few jokes peppered throughout to keep the tone light. I see Prince of Persia as a wannabe Pirates of the Carribean franchise that is only missing the Johnny Depp style memorable character for some street cred and notoriety. After all in essence the Pirates films are basically guys n gals in costumes running from one preposterous situation to the next, that’s hardly a million miles from Prince.

actly how it came to pass that every guy with a tan is Persian and not being American means you must speak with a clipped British accent I’ll never know. Suffice to say I didn’t see many actors, even extras who would satisfy the visual criteria of being of Middle Eastern extraction, and the fact that everyone speaks with the same English accent is disturbing.

I think The Hunt for Red October did it best a couple decades ago, start with subtitles to establish that these guys are not “American”, then segue into the English language in the smoothest possible manner to rest the audience’s eyes.

I guess there will be a generation of Americans that is positive that being from any other country means enunciating your words well and sounding like James Bond. No wonder they get frustrated when people have the hide to speak another language even when in their home country.

The Prince of Persia is slickly made, fairly entertaining fare with solid set pieces and a sequel ready plot It has no real (at least graphic) violence, no sex or even potty talk and innuendo.

That doesn’t make it a bad movie, in fact this time it makes it a pretty good one.

Final Rating – 7 / 10. Congrats Jake, all the exercise paid off, now if you can only get anyone to watch this thing instead of the next Saw sequel or moronic spoof film.