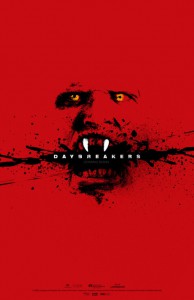 One of the more original and effective posters going around.

As a guy I am genetically engineered to hate chick flicks.

Why? I’ll give you two reasons. My testicles.

The story is always formulaic, the laughs generally non-existent and women seem to fawn over things that would never happen, or worse if they happened in real life they would react differently:

“Oh George Clooney left the woman he didn’t really love after 24 years to be with the prom queen. How romantic!”

Let’s see how romantic that is if it is creepy uncle Frankie in his late 40s with a beer gut hanging around the blue light disco. (Do they even have those any more?)

Anyway having watched Daybreakers now I have a handle on the female point of view.

Daybreakers is a lazy formula movie for guys, the action never anything more than OK, the story predictable and guys go “ooh” over things that would never happen. You watch it and have forgotten it before the credits finish.

There isn’t even a redeeming feature of ubercool violence or perhaps some gratuitous female nudity. Hell even rom-coms normally have at least one Jennifer on patrol to look at while the missus sobs; Love-Hewitt / Aniston / Lopez.

So in Daybreakers it is apparently 2019. Vampires not only exist but they run shit, and as they feed on humans (natch), and there are so many of them, we are in short supply and the Vamps are suffering “Food shortages”.

Some are literally begging on the streets for even diluted blood, and high rollers savour pure blood when they can get it like expensive wine. The early sequence showing the troubles experienced by the vampire race seems like it would work better if played for laughs (and maybe they were), a Bloodbucks style coffee shop selling 1% blood-coffees and poverty stricken vampires seems more amusing than concerning.

The one cool element that the movie uses is directly stolen from another crappy vampire movie, Blade:Trinity, where corporations farm humans and harvest their blood to create a sustainable supply. It was the only good bit if that movie, and it is basically the only good bit here.

A lack of blood has a mutating effect on vampires, who normally appear like normal humans, but become more and more like the scraggly monsters shown in dodgy horror movies as they deteriorate. Human blood is so scarce that some vampires have taken to cannibalism, which only hastens the mutation.

Ethan Hawke is (slumming it here as) Edward Dalton, a vampire scientist charged with finding alternative sources of vampire food, one of his tests gone wrong provided me with the only chuckle in the film. His boss is played by Sam Neill as the “big corrupt business guy” who cares only about results and profits, Sam always tries but is wasted here in a hammy role.

Sounds awesome so far right? I agree, not really.

So things heat up when Ed has a bingle in his car on the way home from work, and when the occupants of the other vehicle get out they are HUMANS! Ewwww, yuk.

Ed is a bit of a SNAV (Sensitive new age vampire) and he lets them go, and of course a few days later who shows up at Ed’s pad, the humans, that’s who.

It turns out that an “underground railroad” arrangement exists to move humans to freedom, it is run by a former vampire known as Elvis, and played by Willem Dafoe in a role so pointless and pathetic that he will no doubt regret it one day if he doesn’t already.

In essence as happens with these films Ed discovers that he can save both the human and vampire races, and equally predictable is the fact that some nasty parties don’t want that to happen and try to stop him, leading to a crescendo of sorts.

There are some respected actors in Daybreakers that will likely want this stricken from the record, the directors are Australian brothers that made Undead a few years back, which was another plotless wonder with some inventive visuals, just like this.

Character development is minimal, there are only good guys and bad guys and you needn’t bother learning their names, they are only there to move the plot forward to the next bit as swiftly as possible.

Daybreakers is not a horror film, there is one scene only (shown in every clip I have seen) with a pretty gross looking vampire, but the scare factor is negligible.

The previously mentioned experiment gone awry worked in a momentary “Eww gross” way but hardly added much value to proceedings, there are some cool visual effects and the movie looks better than I would guess the budget deserved, but at the end of the day, Daybreakers is really a clichéd cookie cutter disposable flick, the same as hundreds of others released annually.

If I continue to bag every Valentine’s Day and similarly horrid looking rom-com without watching it, I guess in the interest of fairness I need to acknowledge that there are two sides to the argument.

This is most definitely a guy’s equivalent to the cheapie rom-com.

Final Rating – 6.5 / 10. Disposable and ultimately forgettable. As with so many vampire films you go in with high hopes and leave unsatisfied.