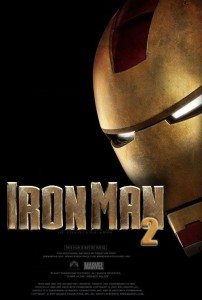 I’m in this one right?

The beauty of the original film was that at focused on the origins of the character, a side-benefit of that was the fact that it had Robert Downey Jr in the lead as the charismatic billionaire playboy Tony Stark. Let’s face it, following Stark around for the first 40 odd minutes was as much fun as the bits where he put the claustrophobic’s nightmare suit on and fanged around with rock music playing in the background.

Perhaps that’s why they chose to focus the first 10 minutes on establishing the new playa in town Ivan Vanko, played by Mickey Rourke, who it must be said looks like he is carved out of wax in this film? Perhaps the lethal cocktails of drugs, alcohol and steroids that he has ingested over the years has pre-embalmed him from the inside out? In any case he looks creepy, which is a good thing I guess as a villain. Vanko is the son of an ex-colleague of Tony Stark’s Dad, who was the original brilliant scientist and inventor who set up Stark Industries in the first place.

Vanko’s Dad has just died, and he has decided he does not like Tony Stark one bit.

I think I’ll take a breath to point out that Iron Man 2 is a good film, but not the great one as some have suggested, and like Spiderman 2 it is nowhere near as good as the original, (why does everyone talk Spidey 2 up? It was mediocre at best.)

The problem is that they tried to force too many new bad guys in, and tried to bring in subplots for Pepper Potts of all people, even Stark’s bodyguard gets his own couple scenes, I know he is the director but give me a break!

What I am trying to say is that they took too long to get Scarlett Johansson in the catsuit, and once they did she only got a few minutes to strut her latex clad stuff. (For all the reports about her frontal assets I need to say that there is strong competition from behind… so to speak.) 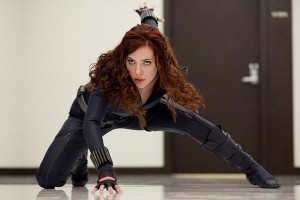 But I am jumping ahead of things here, back to the story.

Everyone now knows that Stark is also Iron Man, and the government wants him to hand over the suit so that they can do… whatever with it. What everyone doesn’t know is that the very thing keeping Stark ticking is also slowly killing him, and he desperately researches every possibility that might prolong his life and save him. 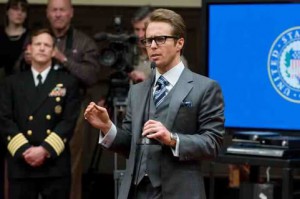 A strong advocate in Stark handing over his weapon is his main competitor in the arms manufacturing game Justin Hammer (Sam Rockwell). Hammer tries to emulate Stark’s every mannerism and so desperately wants to be seen in the same favourable light, only he is always 5% short in every way and therefore comes across as a needy wannabe, albeit a billionaire version. Tony tires of the dual roles of running a massive global company and being a guy in a heavy suit, so he hands the running of the company to Pepper Potts (Gwenyth Paltrow) his loyal secretary with immediate effect. This gives her far more screen time than in the first film, and therefore knocks this film down a notch, it also justifies a slightly tiresome subplot later on in the film which hurts it again.

And yes I did put that photo in just so I could make that lame, corny 90s reference.

Along the way a nifty young lawyer named Natalie (Johansson) moves into Tony Stark’s radar screen, he is entranced by her various skills and capabilities; and no doubt by her amazing rack and smokin’ body, and appoints her his personal assistant. This is handy for the latter part of the story, (and hopefully a sequel that will ideally take place in either a sauna or nudist colony. I will be happy in either case.) Pepper seems a little perturbed (jealous) by her presence… but who the hell cares?

Once Vanko and Stark finally are introduced all logic and plausibility flies out the window. This is OK in small doses as leaps of logic are required in any superhero film, but the first film took such pains to show just how all these crazy events could almost be believed in so-called real life that changing tack and throwing logic out the window is annoying. So many leaps were required that I was puffing and my knees were sore by the end of the first Iron Man / Ivan Vanko battle.

Leap 1. Tony owns his own Formula One racing team, and at the last minute decides he wants to drive his car in the Monte Carlo (I think, could have been Monaco) Grand Prix. So he’s a billionaire and all but I can’t help but feel more paperwork might have been required. Let’s let this one slide so we can get to…

Leap 2. A heavily tattooed waxy thug looking guy walks into one of the more tightly secured areas on the planet, a high rollers paradise during a major sporting event, with a helmet that is less worn than perched upon his head, and is able to open a gate and walk onto the track unimpeded. Furthermore no police or security try to stop anything that follows in the scene or in fact the entire film. One bullet to the shiny forehead, film ends. 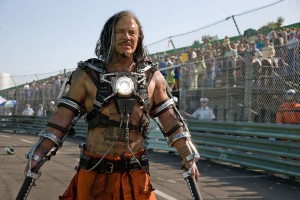 Leap 3. Vanko has such hand to eye coordination that he can slice not one, but 2 racing cars that travel up to 300km/h and around 200km/h coming out of corners (thanks Wikipedia, you never lie!) with his amazing electrical whips of destiny. OK so let’s assume we swallow that too.

Leap 4. The first guy to react is the bodyguard and Pepper Potts, not security and/or the cops that must be in huge numbers at such an event. He gets to Stark first by driving against race traffic (fanging at the afore-mentioned speeds) until he reaches Stark and Vanko. (I feel I should point out here the impossibility of the oncoming car passing other cars near the crash, as they had no way of getting around the crash anyway, but we’ve ignored common sense till now.) … Then Vanko catches on fire so we can see his spiffy togs, Stark gets the suit and after a brief stoush Vanko gets captured.

Vanko and Hammer ultimately team up to move towards their dual goals, for Vanko revenge for Hammer the #1 spot.

As Stark’s health and strength deteriorates further he formulates some sort of bucket list and throws caution to the wind, this alarms Potts and Roads as they seem to recall that he is in possession of one of the more effective and potentially lethal outfits in the known world, perhaps more effective than Beyonce in a leotard in that film clip? Roads makes every effort to make him surrender the suit, and ultimately plumps for poaching one of his Summer collection suits to take to the army research dudes.

Nick Fury (Sam L Jackson) pops in (contractually obliged to be in almost every Marvel superhero film for eternity) and informs Stark that he knew his Dad, and that he might revisit some old home movies for advice and perhaps assistance. Also he points out there is more to Natasha than meets the (watering) eye, if that is even possible. Come on the bloody previews told us all that. Need I also point out that after Iron Man came out and was such a success that showing Johansson in the suit seemed a little redundant, we were all going to watch it anyway and that would have been a nice (slightly arousing) surprise!?

With all that going on we haven’t even gotten to the big finale where everything comes to a head and Stark must ward of a horde of remote controlled droid assassins whilst simultaneously saving various people at keys moments and pausing to discuss things with others. Phew, maybe a case of too much information?

At least I thought so.

Iron Man 2 had most of what made the original a success, but too much of other stuff that wasn’t needed then and didn’t serve to improve this sequel.

(I soooo wanted to bag Mickey Rourke as the bad guy, especially when I knew he was to be a Russian. I thought his accent would be tortuous but it actually wasn’t, at least right until the very end. I think he did OK in a mostly non-speaking role but didn’t add much to the film bar his saggy cheating death appearance.)

When watched in isolation Iron Man 2 is a bit of a muddy mess at times that survives largely on the goodwill and credibility forged by the far superior original. I liked bits of it and think the franchise definitely has more in it to come, but feel a little let down by this one. Perhaps that’s why I waited almost 2 months to watch the damn thing after it came out.

Final Rating – 7 / 10. Worth a look, but the original was far superior. Less Potts, less Roads, fewer bad guys, more Scarlett in the suit and a return of the more palatable Tony Stark for 3 please Mr Favreau. I’ll even let you have your own pointless sub-plot if you do that for me.