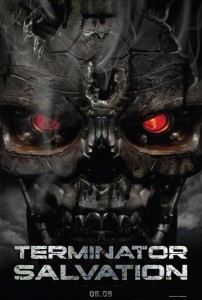 Just the image alone sets me at half-mast.

The worst part about Terminator – Salvation (T4 from here) is that it ends soooo badly. If it started lousy and improved towards the end I may be more forgiving.

It’s not that I hated the movie, I actually really liked the first hour and thought it was building to something really good, but after an hour of developing a solid platform McG totally betrays the storyline in favour of remaking the last 30 minutes of both T1 and T2, only with far less success.

We all know the Terminator story, a robot from the future is sent back in time to kill a teenage boy, who if allowed to live becomes the leader of the resistance to the machines. Blah, blah, blah happens all the time.

McG thankfully sorta ignores the third film which was essentially Terminator filler anyway. We fast forward to the war between the resistance and SkyNet, Christian Bale is now a big-boy John Connor, though still not “the Man” in the resistance he is already well respected. The setting is suitably apocalyptic, though in certain scenes it is quite obvious that they are on a set with necessary mist or off screen fires that luckily also light the scene well.

The film revolves around the efforts of the resistance to cripple SkyNet using a newly discovered weakness that will apparently end the war and give victory to the machines. Conversely SkyNet are still searching for Connor and Kyle Reese, the soldier Connor sends back to protect and warn Sarah Connor, his Mum, and who through the meeting becomes John’s Dad. (No wonder Sarah spent most of T2 in the psychiatric ward!)

Now seriously, the send a Terminator back in time to kill was a great set up for the first film, they also justified the need to do it again very well in the second. In the 3rd they thought “just make it a hot chick and no-one will care”. Now we have a 4th where they have another crack. Why not just send 5 Terminators back to 1984 to help the original Arnie fuck Sarah up and end the whole thing?

That’s enough plot, it is a Terminator movie after all, you can sum up any of them thusly:

1/ Terminator tries to kill Sarah/Young John/Kyle Reese/Adult John.
2/ John/Sarah/Kyle try to escape or fight back, depending on how far we are into the film.

The director McG has previously made such *COUGH* ‘classics’ as Charlie’s Angels 1, and then for a change of pace Charlie’s Angels 2, so it downright frightened me when I first read that he was taking the reins here. Then Christian Bale was announced as Connor and I was back to cautiously optimistic, after all, this is a Terminator movie and I reeeeaalllly wanted it to be good.

(That’s what happens when one of the first is in your top 5 films of all time and Hollywood don’t listen to your pleas to cease unnecessary sequels. If you simply hafta make it please at least make it good.)

As the credits rolled (after a strange Matrix-ey effect that seemed out of place) I had more mixed emotions at the jumble of actors on display. “Serious” actors like Christian Bale, Helena Bonham Carter are contrasted by a bunch of no-names like daughter-of-hippie-parents (?) Moon Bloodgood and rappers (sorry Common, win an Oscar and I’ll call you an actor).

Thankfully enough Moon is OK, the guy who plays Kyle Reese is pretty good, he’s obviously studied the mannerisms of Michael Biehn. But it’s the new blood Sam Worthington who plays uber-intense Marcus Wright that leaves the impression. I’ve already forgotten Connor’s missus, Common does nothing and 90% of the rest of the cast, but I think Sammy may have a future in action films. If nothing else he brings more personality to his part than Christian Bale, which is odd, (if you’ve seen the film you’ll know why).

Again the first hour or so is surprisingly strong with some really good action scenes, before McG resorts back to his previous career of crowd pleasing Charlie’s Angels pap. Now McG, we’ve seen the first two Terminator flicks, we know the lines and more importantly how each of them ended, why use most of the same lines from them and then directly rip the finales of both of them?

Some cringe-worthy moments include criminal misuse of the line “I’ll be back”, a pathetically forced use of a G’n’R song from T2 and the twee use of the cute black kid with an afro, most notably near the very end. After all this though there is one reference to the first three films that was well utilized and perfectly justifiable.

Also, in such a big-budget flick it was strange to see some very obvious examples of poor CGI, and some stunts where I immediately thought “wow that was a crappy stunt”. In one scene there is an explosion and three guys fling backwards A-Team style, in another a car is blown up by a missile and explodes in another direction altogether.

I must make mention here that the good moments actually far outweigh the bad, and until he ran out of gas at the end McG really built something promising. If the studio bigwigs gave him a shorter leash and made sure he kept a more consistent tone I wouldn’t mind them giving the home of football another crack at the franchise. I think they might want to give John Connor either a better role or a personality. It is fully understandable that after being told at 13 he would be responsible for the survival of the human race down the track that he might be a teeny bit serious but it doesn’t add much to an action film.

It was very refreshing to also see a movie where I actually could feel it building towards a climax, even though it was bit of a letdown. Most movies nowadays have fight/fight/chase/sex scene/big fight/credits.

If there weren’t ever a T1 or T2 this would be an impressive flick, and perhaps to the lone guy out there who hasn’t seen either of those and went to this he might agree, (but why would he even see this movie?) As it stands, unlike Alien 4 and Rocky 5 with T4 we have a sequel that doesn’t stack up against it’s more famed predecessors, but doesn’t embarrass the franchise altogether.