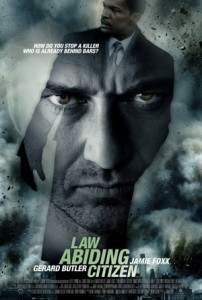 Hollywood can’t even make mindless action without fucking it up with unnecessary plot devices and twists and misguided moralising.

Why can’t I as a simple everyday punter expect a decent B movie with a few good kills and maybe some dumb jokes?

Nooooooo, not in this day and age of Lakeview Terrace, The Brave One, Death Sentence and Law Abiding Citizen.

The opening scene apparently justifies the final 90 unnecessary minutes. Gerard Butler plays Clyde, the victim of a home invasion that goes wrong. He and his wife are beaten and stabbed and his young daughter is killed. He alone survives.

(Rethinking the events of the home invasion: two guys wearing masks knock on Clyde’s front door and immediately hit him with a bat, (the cats-eye would have saved him), one of the thugs continues beating him, the other takes a few trinkets from the shelf and then says “Let’s go”. Seriously, you plan a home invasion, get the masks and bat, steel yourself and bail out after a few knick-knacks? In short you risk 20 years for a murder rap for a maximum couple grand, where is the logic there?)

Just wait folks, if you think that wound me up for no reason it only gets worse.

Clyde is now recovered and meeting with his lawyer Nick, played by Jamie Foxx. Nick is a young hotshot who cares more about his conviction strike rate than justice, and as he has concerns that the two defendants might slip on a technicality and ruin his %, he cuts a deal with one to rat on the other.

Now of course the real bad guy is the one who squeals, and he is smarmy and smug about the way things turn out. Clyde is not happy with this unexpected twist, and I know what you’re thinking, but this isn’t Death Sentence or Death Wish 2, it blazes its own trail. Unfortunately though, you couldn’t find a more ludicrous and infuriating trail than the one they choose here.

My moral? Sometimes doing the same thing over isn’t necessarily a bad thing, as long as you do it in an entertaining manner.

From here on in LAC takes the blackest of black turns, and in doing so loses every shred of credibility.

Nick and his wife are 10 years older and I tell ya they don’t look like they have aged a day! They now have a 10 year old daughter of their own.

The squealing bad guy, now out of jail, is murdered in a brutal manner by a cold and calculated killer. Nick is set on the case and immediately suspects that Clyde must have something to do with it, which makes sense given earlier events.

They take Clyde into custody and a pointless game of cat and mouse begins. In the initial interrogation Clyde out-lawyers the lawyer, in a way that even the dopiest person watching must have seen coming, but not hot-shot Nicky.

Clyde promises to tell all as long as his simple demands are met, and things get more and more wacky and frustrating from here til the credits roll downwards.

Clyde remains in prison however the bodycount rises at a frantic rate, as everyone associated with the case is systematically picked off in a methodical and astonishingly convoluted manner.

Nick and his buddies suspect that Clyde must have someone on the outside, and his methods and background slowly become more clear. In one of movie-making’s stupidest techniques, Nick must be in attendance at every discovery so he can grow more frustrated and involved, doesn’t anyone have a phone so that they might call the local cops to check on something rather than take a helicopter across the city?

The last 30 minutes is an exercise in pisstaking once the full scope of the situation is revealed, I could see it coming and still wanted no part in it when it arrived.

Law Abiding Citizen is grandiose and overblown, a twisted revenge fantasy gone awry with some awkward posturing and moralising thrown in for good measure. I like a little violence in my movies, even pointless violence, but trying to justify it with a plot that has more holes than Ricky Ponting’s Advance Hair weave just shits me.

Law Abiding Citizen wants to be seen as Se7en crossed with Saw, but to me at least it is nothing more than unnecessary crossed with shit.

Final Rating – 5 / 10. A B-movie that loses a grade through an inane plot and an inexcusably bizarre message.