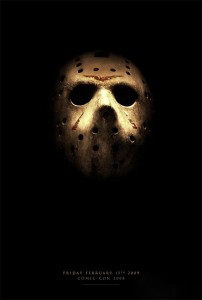 Does anyone make anything original anymore?  Doesn’t matter when it makes-a-da-cash *.

I haven’t yet bothered looking back to see when horror started being obviously profitable for studios but I reckon it was about 5 years ago or so. Since then the number of wide released (mainstream?) horror movies have increased exponentially each year, ranging from absolute crap to some pretty cool stuff.

Problem is that the first weekend movie going public are mostly teenagers who will see anything, meaning that even the absolute crap will frequently make money, especially if it has a cool poster. This makes it very hard for someone who loves horror but has some basic standards;

“Prom Night” made a lot of money. Should I watch it or is it crap?
(Answer: It is absolutely shithouse. Avoid.)

I have raised the horror fairy idea before and with sequels, remakes and reboots it is more than a little confusing without help. One must first ask a few basic questions:

1/ Is it a “reboot” or a “remake”? If it is a remake and the first one was good, why bother? (See *)
2/ Is the original film maker involved in any way? Yes or no, this is tricky. 28 Weeks Later is good. Blair Witch 2 sucked.
3/ Is the new film toned down or gored up? Goring up is an easy and quick way of destroying a potential franchise by upping the body count, toning down for a rating sometimes makes a film too soft, (see Die Hard 4, not a horror movie but still).
4/ Have they taken the original further? Growing a character or expanding a back story is sometimes a good thing in the right hands. Sometimes staying pat and making the same thing is good too.

With that in mind here are your answers specifically regarding Friday the 13th:

1/ Remake. First OK but a little dated.
2/ No. (The writers wrote “Freddy Vs Jason” if that counts. I vote no.)
3/ Gored up a tad. (I watched the unrated “Killer Cut”.
4/ No. If anything they have pared down the story. Not a bad thing when the Jason mythology had grown a little too far over countless sequels.

Now I can’t blame anyone who was making horror films in the 70s, 80s and 90s for wanting “IN” on the current popularity of horror. Imagine being a die hard fan of something, participating in it for decades for no reward simply out of love and passion for the subject. Eventually you move on or grow out of it, only to find that suddenly your previous hobby is suddenly incredibly in vogue and Ka-Ching! Profitable.

You’d be a little pissed wouldn’t you?

Credits are rolling and I feel like ejecting the dvd, “In association with Michael Bay”! THE Michael Bay who made Bad Boys 2, Pearl Harbour and has single handedly prevented me from watching Transformers (which I had zero interest in anyway).

The movie starts with a flashback to 1980 with Jason’s dear old mum at the tail end of her murderous rampage. I say the tail-end because in the first real scene she gets her head chopped off by a young girl with a machete. (Which is a feat in itself, the notorious terrorist hostage beheading footage of a few years back showed it is no easy task.)

That’s the backstory really. A summary of the whole thing:

Cut to “Crystal Lake – Present Day”. A bunch of idiot teenagers trudging through the woods, it turns out they are after a marijuana crop that they’ve heard grows there. They plan to rip some off and sell it for a healthy profit.

Cue lots of “someone behind something shots”, in this case trees.

A new problem that has emerged in recent years is that when clichéd techniques are so effective it must become hard to make a movie without resorting to them. You know “teenagers making out in a tent see shadows outside” stuff.

And before you tell me that yep that is pretty close to your standard teenagers nowadays, justify to me why I should care that they are then all killed in gruesome fashion. It makes me want to cheer for the bad guy.

Also it seems that if you live in an area with dodgy mobile phone coverage, you’d be best served moving house, as this is invariably where all the haunted houses and serial mass murderers live. Although to be fair it sorta does help explain Jason’s murderous rage, he can’t enter into most competitions and wasn’t able to vote for Clay Aiken in American Idol!

Anyway on the DVD I rented this is the way that Batch 1 went out:

Kill 1 – Couldn’t see. Machete I think.
Kill 2 – Terrible kill, illogical. (Watch for yourself and tell me why she couldn’t get away. Do they make sleeping bags out of asbestos now?)
Kill 3 – Shakey camera meant I couldn’t see. Usual guy pulled through floor to miraculously explode in blood storm. Maybe a blender was under the floor?
Kill 4/5 – No suspense, just finishing the job so we can move to….

In a local service station slash convenience store a Stranger is asking if the store worker would mind him putting up a “Missing” poster, leading to several HUH? moments.

HUH? Moment 1. The convenience store guy says no. Who has been to a local deli and not seen a local cork noticeboard? Would it have ruined the plot if he said yes?

HUH? Moment 2. (And my favourite.) An IDIOT TEENAGER behind him from Batch 2 says something to the effect of “Move it, you’re being a dick.” What? A guy is looking for his missing sister in a polite and patient way and is being a dick!

Moving on, the Batch 2 car full of suitably multicultural IDIOT TEENAGERS head on to Crystal Lake, and their premature deaths can’t come soon enough for me. Oh yeah, there were some terribly unfunny “jokes” that were apparently used in this scene, I think I recognized the attempts.

HUH? Moment 3. A local cop pulls over the Stranger (now named Clay) and basically tells him not to bother looking for his sister, she is probably somewhere else, perfectly safe. Again, the guy is low key, polite and looking for his missing sister, what’s the harm in letting him look around?

Batch 2 arrives at the holiday home of the most reprehensible IDIOT TEENAGER’S parents and immediately go about drinking and smoking heavily, inevitably leading to sex, although strangely (yet predictably?) enough not for the two non-white guys, a black and an Asian guy.

Meanwhile, Clay is door-knocking looking for his sister, during which he visits the standard horror movie Crazy Lady who seems to know a lot more than anyone else… But she ain’t talking.

His next visit takes him to a guy feeding a wood-chipper in the workshed. I jotted down at that point “Bet that’s coming back.” Will I be proven right folks? Just wait and see.

Of course Clay next visits the cabin filled with Batch 2, where there is much posturing and faux stupidity all around. Clay decides to move on and then the Chief Dickhead’s girlfriend, up to now the most sensible one decides to wander off with him.

HUH? Moment 5. Sensible girl walks out of the cabin with Clay and asks “Where is your car?” as Clay walks the final two paces to his motorbike IN PLAIN VIEW.

Of course Clay and sensible girl decide to walk through the woods for no reason, and of course it gets dark real quick.

We’ve got around 50 minutes to go from this point. A lot of teenagers die, no-one cares. A couple have sex, a couple of girls get nude enough I guess.

The problem here is that when the plot is when the backstory contains 5 points and the movie really starts with the last and stays there, how do you fill 90 odd minutes and keep it interesting? In the case of Friday the 13th you can’t.

This film is at times suspenseful yet totally disposable. As mentioned the backstory is explained in maybe eight minutes, then we have 90+ minutes with “Noise / startled teenager / view from behind something / Jason appears and kills”. This happens (with only precious minor variation) some dozen or so times!

Jason remains an enigma, if not indestructible then able to take immense punishment, able to catch sprinting teenagers while never breaking a slow stride, and able to appear behind someone regardless of how impossible this may seem. At one point he kills one of the ITs on the front yard, and when the others look out the window only seconds later he is on the ROOF! We never really see what he does with the bodies or how he hides them, we aren’t sure if he still has hate or if he is simply a mindless killing machine.

When your target audience are the type that say “Oh my God!! He just killed that guy!!” 12 times a movie, I guess you don’t need to.

Kill! Scream! Kill! Chase! Kill! Run! Kill! Ain’t doing it for me at all anymore. But while the formula continues to make money for Michael Bay and other Hollywood types who don’t care and have no intention sitting through this mindless crap my opinion counts for squat.

Final Rating – 5 / 10. I wanted so badly for these kids to be killed earlier. 2 out of 5 of the points given are for items described as “stupendous” in the film.