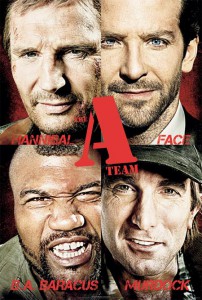 The actual film is almost as photoshopped.

Most films that are released get a few ads in the week or two coming up to the release date, in the papers and on TV. The bigger ones get combined with various promotions that are generally related to the target demo, eg: a soppy Valentines day weepie will usually be tied in with women’s magazines or the E channel, (do any guys actually watch the E channel?).

The last time I saw a “full court press” for a midrange film was for the Adam Sandler atrocity Click a couple years back. It was seemingly on every channel, got an ad in the paper every day for months up to the day of release instead of a couple weeks and had so many associated tie ins and competitions that it must have been harder to not win something if you entered them all.

As we know now Click sucked big time. Seeing how Sandler hasn’t been in a truly good movie since Happy Gilmore we might have seen that coming.

A few weeks back I was away on a weekend trip in Melbourne and it seemed you couldn’t go 20 feet in the city without seeing an ad for the A Team. It was on bus stops, in every paper and even on the banner of the Kangaroos when we went to the footy. The half time entertainment was a thinly veiled promo for the A Team when they handed out gift bags to participants and in between each goal the scoreboard flashed the score and a brief ad for the film, just in case we’d forgotten in the last 72 seconds that it was on the way.

I cannot impress enough how tired I was of The A Team, a week before it even came out.

Now the other day I went to the cinema with the intent of catching Get Him to the Greek, but the only screenings were on at 9.15. I have a 3 ½ year old and a job, I can’t be going to a weekday session at 9.15. the movie doesn’t start till more like 9.45, and assuming it is only 90 minutes I am not getting home until midnight… Sooooo looking around at the marquee, what else…

Given the paragraphs above I went into the cinema knowing full well that A Team would suck, but I would be home by 10.

So why would Hollywood bother making a film version of an 80s TV show that much like Star Trek was exactly the same episode every week?

So again “why” you ask? Because familiarity brings comfort… and cash (KA-Ching!).

Now lets compare the 80s A Team from my memories as a teen, and the 2010 version. 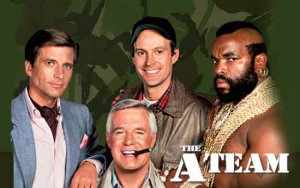 Hannibal – Grey haired and always gumming a cigar. The brains of the operation. Said “I love it when a plan comes together” at the end of every episode.

Face – Pretty boy. Good with the ladies. Can blend in with the elite Bond style and not be spotted.

Murdoch – Apparently crazy though never seemed to be. Could fly anything.

BA – Was black and muscly. Rocked the best Mohawk ever. Was usually sleeveless. Said “fool” a lot, usually prefaced by “I pity the…” Hated flying. Was Mr T.

At the time, every kid wanted to be BA or Murdoch. No exceptions. 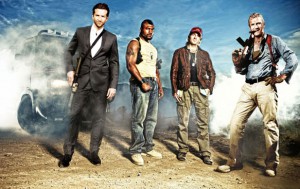 Hannibal – Grey haired and always gumming a cigar. The brains of the operation. Says “plan” a lot (too much) in general conversation. Is Liam Neeson.

Face – Is pretty. Is very good with ladies. Is Bradley Cooper.

Murdoch – Is apparently crazy though with only gibberish as proof, (real crazy would be flying a plane into a mountain). Can fly anything. Is Sharlto Copley with a redneck accent that drops out occasionally.

BA – Is black and muscly. Rocks a reasonable Mohawk. Is usually sleeveless. Says “fool” altogether too frequently. (You know how people who say “dude” a lot shit you? Think worse than that.) Is not Mr T. Is Rampage Jackson (whoever that is).

Then without any real segue or explanation we are in the present day, the Team are told that “Saddam’s flunkies” have stolen some valuable printing plates and intend to churn out 30B in the next 30 hours unless they are stopped. Lil Jessica Timberlake (Biel) is in the army and warns them off the mission.

Cut to Bagdhad and the Team carrying out an apparently intricately planned series of inexplicably preposterous actions that seem both unnecessary and irrelevant when a well aimed bazooka would do the same trick.

Of course carrying out the mission isn’t enough. Things go wrong and it’s not the Team’s fault. The General is killed, Ms Timberlake is demoted and they are thrown in 4 maximum security prisons with 10 year sentences.

It shouldn’t be a spoiler to say they escape and get back on the case. BA has made a vow of non-violence, a CIA guy named Lynch (Patrick Wilson) is involved somehow and Biel thinks the Team are shonky. Oh and she and Face were an item in the past.

There are multiple narrow escapes still to come, every member of the team gets to utilise their personal strengths a couple times, and there is double and triple crossing galore all over the shop.

Hannibal always seems at least one step ahead, often more. There is much monologuing by various bad guys as that is the only way the shambling plot can possibly be even vaguely understood and there are balletic explosions galore.

So I hated it then?

Well not really. The 2010 A Team is preposterous, unnecessary and often dumb, but it tries to be entertaining and is at the core very harmless and easy to watch if you only shut your brain off, and let’s face it no-one walks in expecting Hotel Rwanda. I actually think this would be a pretty wicked 2 hours if you were a 14 year old boy.

This is the logical progression of a harmless 80s TV show. In the show no-one got killed, no-one swore and there were a bunch of explosions. In 2010 that has moved up a little to some people die but there is absolutely no blood, there is frequent low level swearing (no F words), insinuated sexuality and still a bunch of explosion, only with a bigger budget this time around.

In fact I’d go as far as saying this is Pay TV for the big screen. It’s essentially a 2 hour TV special, just that you pay $20 bucks walking in and don’t clean up the popcorn from the carpet otherwise.

While I’m here back to the unnecessary reference. Please name me a film from 2010 so far that was absolutely necessary, they’re thin on the ground.

Final Rating – 6.5 / 10. Not much to rave about, but like the Hippopotamus Oath says “First do no harm”. Unlike a lot of other crappy big budget releases this is the definition of harmless in every way.