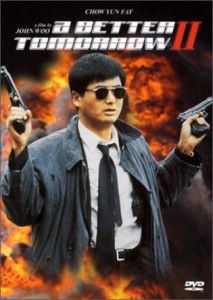 “And this is how I invented the 2 gun thing…”

I watched A Better Tomorrow a few weeks back. Not bad, not good, only OK. A normal person might have been happy leaving it there, but the DVD I borrowed was a multi-pack and had 2 & 3 included, and I am a little bit OCD with completing things I have started soooo…

Still directed by John Woo, still with the same cast as the first, only different.

To recap: Ho is a former criminal gone straight at the request of his late father. Kit is his little brother, a policeman, now undercover.

Mark, played by Chow Yun Fat, is now dead, but Chow Yun Fat was famous by this time so he returns in daytime soap style as Mark’s twin brother Ken.

Lung, the guy who previously sold Ho out and cost him a prison sentence, now runs the crime gang that he was a member of. Right. So Kit is now undercover trying to bust Lung, who wants to go straight for the sake of his daughter. Kit tries to crack onto the daughter in the hope that it will give him access to Lung, only Kit is married with a pregnant wife, and he doesn’t tell her his plan.

Ho is in jail, only he is released on the proviso that he also go undercover to uncover dirt on Lung so he can be busted, which he only does once he realizes Kit is in danger.

Still with me? It only gets more convoluted and unnecessary from here.

So Lung is inadvertently involved in a murder so he flees from Hong Kong to the US. His former 2IC Ko takes the reins of the crime gang and decides that with Lung dead he has free reign, so he sends assassins to the US to bump off Lung and kills his daughter in Hong Kong for good measure.

And this goes on for another hour! Needless to say A Better Tomorrow 2 is long-winded, melodramatic and altogether too confusing, yet it is a better film than one thanks to John Woo hitting his straps in directing action sequences.

It turns out that Ken (Chow Yun Fat) gets involved with Lung in the US (where he proves that he shouldn’t have tried to speak English on film, at least at that time). When the bad guys destroy Ken’s restaurant he decides to take Lung back to Hong Kong, where they team up with Kit and Ho to take down Ko.

(Why are they suddenly buddies? After all Kit hated Ho in the first film, Lung sold out Ho and caused him to go to jail, and Ken has just arrived on the scene? So they can have a big Woo-ey shoot out at the end of the film. That’s why!

The fight scenes are far better than the first film, the same amount of bad guys get killed but in a more aesthetically pleasing manner. Woo has been described as directing operatic violence and this looks like one of the early incantations of that.

Final Rating – 7 / 10. Too long and way too complicated. But it is an action flick, and the action scenes are better than Better 1, so I give this the edge.