Haywire and Ronda Rousey have proven that the ladies can kick ass too, and look good while doing it. It likely helps that the guys aren’t currently doing much to further the genre at present…

This time around we look at three chicks with kicks in flicks. 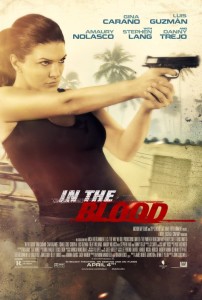 Seriously. Why do people on holiday insist on talking to strangers and agreeing to half-baked schemes without a second thought? The Ruins. Hostel. Turistas. Taken. Now this. In the Blood is a film almost worthy of a ‘proper’ review, but it is so simple that said ‘proper’ review would almost be haiku length anyway.

Lea-ving her with broad skill-set

Mild spoilers I guess, but consider this;

Bad-Caribbean-guy wants what Derek has. Instead of simply grabbing him off the lawless streets (streets where he later wanders about shooting aimlessly because he has the cops in his pocket) he organises a fake ziplining operation, tailors an elaborate Cliffhanger type accident, summons a fake ambulance to the scene and then hijacks the local hospital. A little unnecessary perhaps when he can simply grab the guy, kill the girl if necessary, and get the end goal without all the hassles in between.

Sometimes as the filmmakers hasten to dignify a cheap vengeance film they build an ornate backstory with no semblance of plausibility.

Also, the ‘In the Blood’ thing about the dad is underdone. There could have been a better film if Ava wasn’t as aware of her abilities and came to learn of them through the film. But then again that film has already been made in Hanna.

Final Rating – 6 / 10. Gina Carano has skills and is now looking for her Wrong Bet or Marked for Death. I have faith it will come, but not while she agrees to these cheap knock-offs. 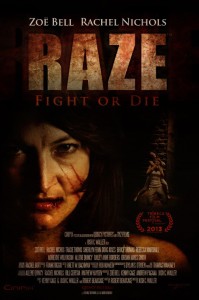 Every single aspect of Raze is ill conceived. It’s an exploitation film that doesn’t exploit anyone but the viewer. A film that hopes to utililise the physical abilities of Zoe Bell but places her in a tight space that confines and hinders her opportunity to use the skill. A film that seeks to shock but then lazily repeats the exact same scene over and over and over, dulling the senses through bland repetition.

One-on-one fights to the death

Watched on by rich cra-zy cult

Quick thoughts; this might have looked like an opportunity to make a little attention grabber, a nasty little controversial exploitation flick about women beating up women. How dare we treat these lovely ladies as mindless pieces of meat?

But fifty women in fifty cells waiting their turn to crush a rival’s head on the stone walls or dirt floor of the large well-like fighting arena is as dull as it sounds. All the women wear the same tight tank tops and many look alike, so it becomes an exercise in familiarity in both look and action, only without nearly as much hair pulling as you’d think.

Zoe Bell is a fit and athletic young woman, but we knew that, and this film doesn’t bother trying to show us she can do anything other than throw a punch. In fact, the only thing the film taught me is that Sherilyn Fenn spent all those Two Moon Junction earnings, and now at nearly fifty she needs money bad enough that she will agree to any film role. 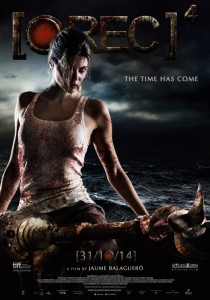 The [REC] franchise just might be the best foreign made horror franchise out there. The first two films especially were innovative, fast paced and nasty. But now, as the poster tagline says “The Time has Come” for this series. Will time be kind?

wakes on a boat. But…

… is this the cure or the cull?

Once the dis-ease gets this bland

for a once-and-for-all cure?

By now everyone is tired, especially poor old Angela – the Spanish speaking Marisa Tomei, who has no doubt had just enough of dealing with the bloodthirsty and frenzied and looks like she could do with a good nap.

The inventiveness and surprise factor that peppered the first couple films, especially Rec 2, is gone. This is just a game of ‘duck-duck-goose’, only with instant fury, spittle and far more ferocious pursuit being the prize.

Eventually all good things must end. Rec had some undeniable high points and some indelible images. You can admire the (Rec) franchise for carving out a solid niche in an already crammed zombie marketplace, but (Rec) 4 plays like a ‘Least of’ montage of everything from the first three films.

Final Rating – 6.5 / 10. Love your work Angela, but it’s time to retire the white singlet and pull out the fluffy ‘retirement’ slippers. Let someone else do the zombie killing…

Let’s face it, action films in general haven’t been great these last couple years. In fact, until Mad Max Fury Road came along there may have been concerns about the validity of the genre. But Mad Max (and Furiosa) did come along.

Sometimes it’s only when we see something so mind-blowing and innovative, that we realise just how drab and formulaic things have come.

While I try to throw a joke or two into proceedings when I can all of the opinions presented in my reviews are genuine. I don't expect that all will agree with my thoughts at all times nor would it be any fun if you did, so don't be shy in telling me where you think I went wrong... and hopefully if you think I got it right for once. Don't be shy, half the fun is in the conversation after the movie.
View all posts by OGR →
This entry was posted in B Movie Haiku Reviews, Crappy Movies, Film, Movie Reviews, The 7th Level of Suck, The Grey Area. Bookmark the permalink.